Tricked out carry guns and the rise of customization 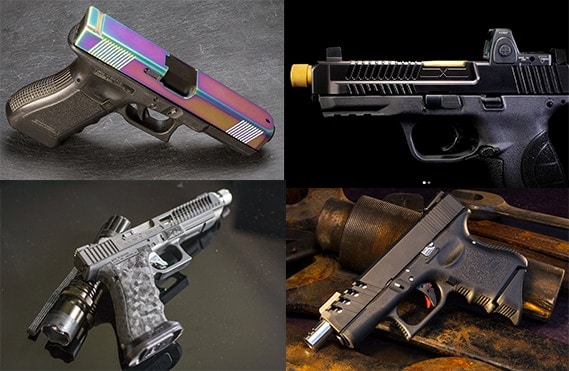 The millennial generation has brought with it a variety of cultural trends that have meandered their way from mainstream consumerism into the gun culture. One of those trends, that of customization, is taking the gun world by storm. Casting aside the ordinary that is a stock firearm, more and more modern gun owners are turning to custom parts, accessories and packages to make their carry guns unique.

Beyond just improving the mechanics of the firearm, gun owners also want something meaningful and personal to them. Curt Staubach of Faxon Firearms explained that for some gun owners it comes down to exhibiting their own personal style through their firearm.

“People want to personalize. If they are going to carry something every day, they want it to be their own. And now with so many options which simply weren’t available just a few years ago, it’s easier than ever,” Staubach told Guns.com.

With mods ranging from trigger and sight upgrades to full frame and internal work, the idea of tweaking one’s carry gun hasn’t all been met with applause. Concerns over the safety of overriding a stock gun’s mechanics as well as the legality of these guns in self-defense scenarios has drawn criticism in the past.

“There is some debate about this concept in the legal community,” Lenny Magill, Founder and CEO of Glockstore, told Guns.com in an email. “If you were to customize your handgun in any way it could be argued that you were ‘tricking out’ your gun to make it more deadly! Or, that it was now less safe than when it was OEM.”

Magill continued, “The flip side of that position is that it can be argued that the modifications done to the gun were designed to make the shooter more accurate so that if one was involved in a self-defense shooting one would be less likely to miss and/or hit innocent bystanders.”

The key to this, custom gurus say, is to rely less on accessories and more on training. Fundamentals should be solidly in place so that any modifications just further personal shooting skills rather than attempting to act as a replacement for expertise.

“There’s absolutely no substitute for good training and the fundamentals,” Staubach said. “I really can’t stress this idea enough. Train. A lot. Standing in a bay shooting at a stationary target isn’t preparing you for any real world encounter. Get some good training, run your gear, get the reps in, shake down your equipment and make the mistakes in a safe training environment so you know how to more effectively defend yourself out in the real world.”

Trident Defense offers full handgun packages, elevating the look and feel of stock guns. Despite the new and improved aesthetics and ergonomics, Ty Cobb of Trident Defense also emphatically explained that tricked out weaponry does nothing for a shooter without solid skills.

“The first thing I tell anyone, these modifications do not replace practice and putting rounds down range. That is the most important thing a shooter can spend money on,” Cobb said. “Practice makes permanent, sometimes a couple of classes to get the shooter in the right direction is more effective than spending money on upgrades that may be unnecessary.”

These upgrades, focused solely on elevating the “cool factor” of the gun ultimately can get carriers in trouble, but Cobb doesn’t discourage gun owners from adding some flashy extras to handguns — so long as gun owners understand that the designer look belongs best in a trophy case.

“‘Flashy’ or ‘Gucci Guns’ — these modifications do not always aid the shooter and sometimes can reduce the reliability of the firearm,” Cobb said. “Most of these firearms end up in safes and are brought out to the range on special occasions. They are treated more as a trophy than a tool.”

Glockstore’s Magill iterated a similar sentiment, stating that while his company certainly goes above and beyond to create a memorable custom look for consumers these commemorative creations are often better suited for significant events or fundraisers.

“Sometimes we will make a commemorative custom Glock to signify a wedding, anniversary, retirement, birthday or other significant event. Often, these guns are given as gifts or used in fund raising events,” Magill said.

With an increasingly saturated custom market, consumers on the hunt for practical accessories to complement their carry guns have a large burden resting on their shoulders. Finding the right pieces of equipment to augment the tool that could decidedly win or lose the most important battle of one’s life can be a grueling task. With a a multitude of companies now offering parts and packages designed to alter stock guns, the question becomes how do consumers find safe and reliable parts for the carry gun?

Carlson of Lone Wolf says consumers should focus on upgrades that conclusively make the firearm easier to navigate.

“Parts that make the gun more user friendly would be the first choice,” Carlson said. “Start with sights, because most factory sighting systems aren’t great. Then minor changes to the trigger to improve it. As a shooter’s skill increases they become more sensitive to how their gun works and can continue to fine tune it.”

While stock guns aren’t going out of style completely the rise in custom guns illustrates that as long as millennials look towards tailored tools, shops and parts makers will continue to churn out personalized pistols for their custom-hungry clientele.