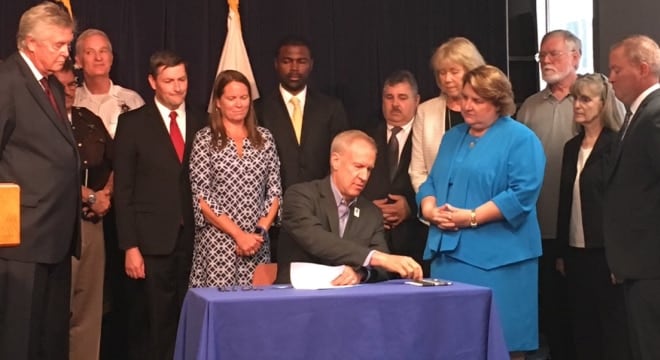 Approved by the Republican on Monday was SB 3256 to institute a 72-hour waiting period for all guns sales and HB 2354 which establishes a process to seize guns from those considered at risk to themselves or others. The Governor painted it as a win for public safety.

“Today I signed legislation to keep firearms out of the hands of those who would use them to commit acts of violence against themselves or others after proof is provided,” said Rauner on the seizure bill.

The measure authorizes courts to temporarily strip the right to possess or purchase a firearm by issuing an emergency extreme risk protective order after law enforcement or a family member presents files a petition contending there is an imminent danger of violence. The proposal passed the state House 43-11 and the Senate 80-32 in late May with bipartisan support although nearly 3,000 filled out witness slips with lawmakers in opposition to the bill.

Gun control groups applauded the action with Giffords saying the state is the 11th in the country and the eighth this year to adopt such a program.

In May, Rauner vetoed and extensively amended HB 1468 which aimed to mandate a 72-hour waiting period for some semi-autos as well as .50 BMG caliber rifles. Current state regulations have a 24-hour wait on longarms but sponsors of the proposal argued more time was needed for guns classified as “assault weapons.” Rauner, on the other hand, felt the move did not go far enough and the new bill, HB 2354, signed this week, applies the 72-hour rule to all guns.

“This sweeping ‘cooling off’ period for guns will protect people throughout the state by keeping guns out of the wrong hands,” said the bill’s sponsor, state Sen. Elgie Sims, D-Chicago. “The 72-hour waiting period provides a strong and effective tool in our efforts to keep our communities safe.”

While studies have been divided over the question of the actual impact of waiting periods on crime and suicide, Illinois already has a mandated delay in transferring the most common weapon used in murders in statewide. According to data from the FBI, of the 941 homicides documented in the state where the murder weapon was recorded, 14 were committed with rifles of all kinds. The vast majority — 799 — were committed with handguns which already have a 72-hour wait under existing laws. Both bills signed this week will take effect on Jan. 1.

In March, Rauner scuttled a proposal to add an additional layer of regulation in the form of state licensing to federal gun dealers. Pressured by Chicago lawmakers and Mayor Rahm Emanuel to sign the bill, Rauner shook his head to the notion that adding more regulation to gun shops would take weapons off the Windy City’s streets.

Nonetheless, Democrats in the state legislature rebooted the proposal just short of a veto-proof margin and sent it back to the Governor in May in a slightly different format. Opposed to the prospect during its legislative history, Rauner reiterated on Monday that he will double down on his veto of the licensing proposal, to the chagrin of those invested in it.

“We know that illegal guns are flooding our neighborhoods and contributing to the daily violence so many in our state face, particularly minority communities,” argued the bill’s sponsor, state Sen. Don Harmon, D-Oak Park. “I hope he will reconsider his threat to veto this legislation and prove that he cares about everyone in Illinois.”

In the meantime, Rauner is backing legislation strengthening school security, getting tough on criminal sentencing and banning bump stocks.

Our plan includes bump stock ban, truth in sentencing, and death penalty murder. People need to be safe and these moves will help make it so.