The RMD stands as UTG’s smallest optic in its lineup. Built on the company’s TS platform, the RMD delivers a 6061-T6 aluminum chassis finished in a matte black anodize. Shockproof, fogproof and rainproof, the RMD delivers a wide 23x18mm FOV lens mounted on an adaptable mounting base that boasts compatibility with Glock MOS (plate 01 and 05) and S&W M&P C.O.R.E. (type 5 space plate plates in addition to other optics-ready firearms with similar plate measurements. 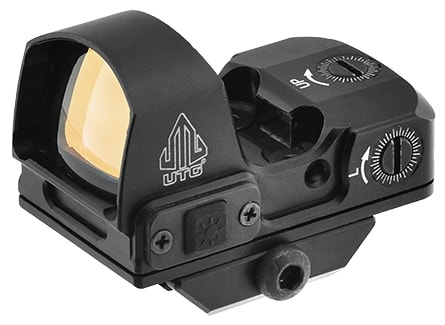 The RMD is powered by a single CR2032 battery with 240 hours of runtime. (Photo: Leapers)

The RMD ships with a low-profile Picatinny plate preinstalled, allowing users to quickly install the RMD on handguns, shotguns and long guns with a Picatinny tail. Utilizing six power intensity settings, the optic aims to tackle various weather and lighting conditions for shooters. Powered by a single CR2032 battery, the RMD offers 240 hours of runtime on the highest intensity setting, with a longer runtime when kept to lower settings.

Alongside the RMD, UTG said its been busy creating mounts to service the new red dot reflex sight.

“UTG has already developed and launched in tandem with the RMD a handful of dedicated mounts to include an absolute-cowitness mount and rear sight dovetail plates for Glock, SIG, and M&P handguns with slides that are not optics-ready,” the company said in a press release.

UTG also added that a green dot 4 MOA model is in the works and coming soon, though no specific launch dates have been announced.

The RMD is available through UTG with a MSRP of $89 while the mounts slip into the market just under $20.