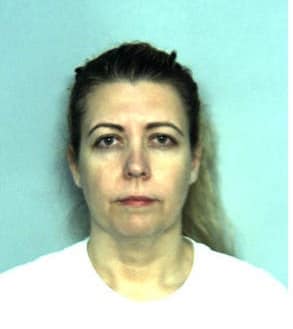 A federal judge sentenced a Virginia woman to a year in prison this week after she admitted buying and selling guns for her husband and lying to government agents to protect him.

Christina Danielle Patterson, 42, bought at least 19 guns on behalf of her husband, Richard Allen Patterson, over a two-year period in Suffolk, according to court documents filed in the Eastern District of Virginia. Richard Patterson, a convicted felon, lost his ownership rights in 2013 for making false statements, court records show.

A June 2017 search warrant of the couples’ residence uncovered 15 firearms, including four semiautomatic rifles, seven shotguns, four handguns and hundreds of rounds of ammunition. Christina Patterson claimed the stash belonged to her and said she exchanged the couples’ fifth rifle with an electrician as payment for installing a generator.

Court records show Patterson visited another government witness twice in the days following the search, ultimately informing the witness’s girlfriend to contact her husband over an “important” matter. She then changed the address of the couples’ home business in official state records and on social media in attempt to discredit the validity of the search warrant, according to court documents.

In a plea agreement filed in November, Patterson admitted she acted at her husband’s direction and intentionally tried to thwart federal investigators as they built a case around him — which is still pending in federal court.

Patterson will serve six months of supervised release in addition to her prison term. Her prosecution falls under the purview of the Department of Justice’s Project Safe Neighborhoods, an initiative designed to combat gun crime.

Through PSN, DOJ prosecutions for those charged with violating federal firearm laws reached a decade high in 2017. Violent crime prosecutions are likewise at the highest rate in more than 25 years.