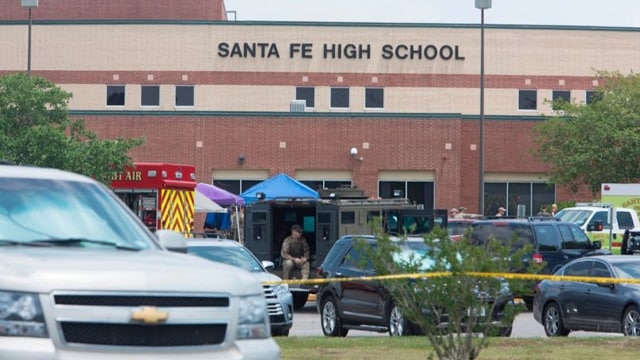 Emergency crews gather in the parking lot of Santa Fe High School where at least ten people were killed on May 18, 2018 in Santa Fe, Texas. (Photo: Daniel Kramer /AFP/Getty Images)

The Department of Justice awarded a six figure grant to Texas this week in hopes of defraying overtime costs incurred responding to a school shooting earlier this year.

The Bureau of Justice Assistance awarded the Office of the Governor’s Criminal Justice Division $1 million, according to a news release published Thursday. The grant will cover a portion of the millions spent by local and state agencies responding to the May 18 shooting at Santa Fe High School in Galveston County.

The DOJ allocated the funds from the Department Fiscal Year 2018 Emergency Federal Law Enforcement Assistance (EFLEA) grant program, which is designed to help states respond to “unanticipated emergencies that cannot be addressed with local resources alone.”

“When there is a tragedy, the Department of Justice is there for police and first responders,” said Attorney General Jeff Sessions. “We honor and respect the law officers who serve at the state, local, and tribal levels, and we continue to support them and their life-saving work every single day.”

According to a police affidavit, 17-year-old Dimitrios Pagourtzis, Jr. killed eight students and two teachers with his father’s shotgun and .38-caliber revolver during a 30-minute shooting spree May 18. He surrendered to police just after 8 a.m. in a hallway, unable to commit suicide as he’d planned.

Thirteen others, including School Resource Officer John Barnes, suffered injuries during the attack. Barnes underwent emergency surgery for a shotgun blast to the arm and spent five weeks recovering in a Houston-area hospital.

Police charged Pagourtzis with capital murder and aggravated assault against a public servant. Few other details surrounding why the teen snapped have emerged in the months since, though his family and other students have alleged bullying may have played a role. The police affidavit even indicates Pagourtzis spared students he liked “so they could tell his story.”

The district denied the bullying claims in a Facebook statement and requested “mindful” dissemination of information out of respect for the bereaving families.