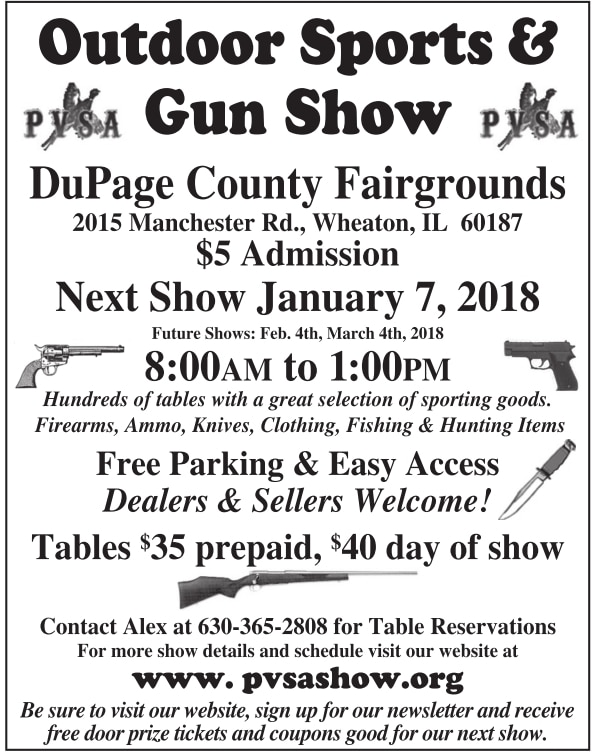 The group has held a gun show the first Sunday of each month, October-April, at the venue for years. (Photo: PVSA)

An Illinois gun group said they have been forced out of their home of over 50 years due to limits placed on their regular shows by the local fair board.

The Pioneer Valley Sportsman’s Association announced this week that restrictions on new shows demanded by the DuPage County Fair Association Board have brought about the demise of their long-held gun show at the public venue. The group said they have held a monthly event at the DuPage County Fairgrounds in Wheaton each October through April for a half-century but the new policy advocated by the board has gone too far and the officials refused to negotiate a compromise.

The sportsman’s group argued they conduct shows that comply with federal, state and local laws and have worked with the board in the past to address concerns, even going so far as removing the word “gun” from promotional signs and temporarily block the display of AR-15s and bump fire stocks earlier this year in response to protests from local gun control groups. Now, with the board wanting to make the temporary ban on popular semi-auto firearms permanent moving forward, and add a ban on magazines capable of holding more than 10 rounds of ammunition, the PVSA says they can’t stomach such a policy.

“The Fair Association Board refused to negotiate with the PVSA Board about these restrictions on the sale of legal firearms and accessories,” said the group in a statement, urging members and supporters of the show to contact the fair board.

The move in Illinois comes as gun shows in California, Tennessee, and New York are suffering similar efforts by local officials to drive them out of traditional public centers.

In DuPage County, the PVSA said they are looking for a more acceptable venue with the “freedom to allow vendors to sell legal items.” The fairgrounds also hosts a twice-annual Chicagoland Civil War Show and the Collector’s Arm’s Dealers Association’s Gun Show, but it is unclear if the new policy will affect those events.