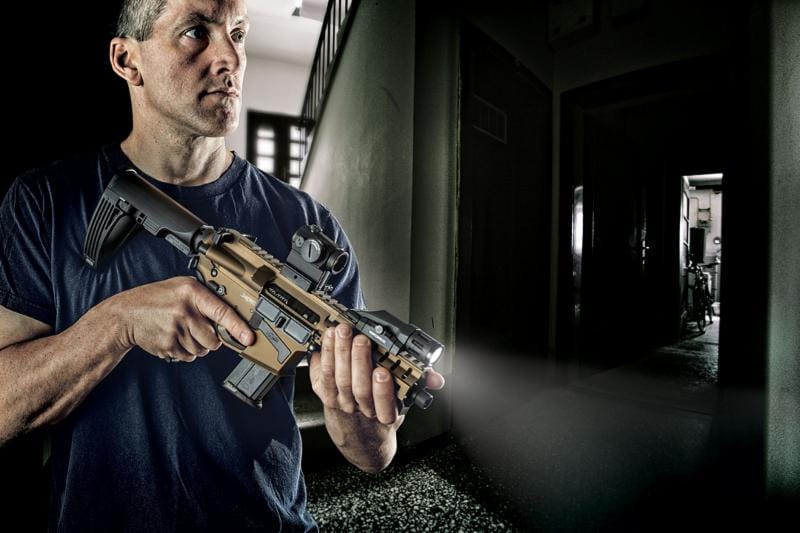 The new line is chambered in FN 5.7x28mm, a round that was first introduced to serve military and law enforcement applications. (Photo: CMMG)

Sporting a 5-inch barreled BANSHEE model and 8-inch barreled PSB configurations, the new series falls under the Mk57 GUARD lineup. The Mk57 BANSHEE features a 5-inch barrel in either SBR or AR pistol configurations. The SBR variant ships with a Magpul MOE vertical foregrip paired with CMMG’s RipStock. The RipStock allows users to rapidly extend the stock without have to move a release lever. The BANSHEE in AR pistol form ships with a Gear Head Works Tailhook Mod2 brace.

The Mk57 Pistol offers an 8-inch barrel with CMMG RML7 M-LOK handguard and CMMG A2 Compensator. The design is topped off with a 20-round ProMag magazine and also works with FN Five-SeveN pistol mags. CMMG says the firearms all boast CMMG’s Radial Delayed Blowback system. The Radial Delayed Blowback system was created to decrease felt recoil by featuring a rotating bolt.

“As each round is fired, a portion of the rearward force is exhausted in unlocking this bolt prior to driving the carrier rearward and cycling the action. With less rearward force to compensate for, CMMG is able to use a lighter carrier and buffer than a standard blowback design would allow, thus reducing the overall reciprocating mass,” the company said in a press release.

Designed by FN Herstal, the FN 5.7 caliber was created to replace the 9mm round for both military and law enforcement. Though the caliber is used by several agencies, CMMG said the caliber saw the most success in the civilian market in the 2000’s. The gun maker says the unique round was an appealing choice for the Mk57 GUARD series.

“The 5.7 is an intriguing round that is perhaps best known for its relatively lightweight bullet design and impressive velocities. From an engineering perspective, we were excited to pair the 5.7 with our Radial Delayed Blowback system. I think it’s safe to say that this combination makes the Mk57 one of the lightest recoiling pistol caliber carbines on the market,” commented Chris Reinkemeyer, CEO of CMMG.

The company announced it will also provide a separate lightweight buffer for consumers to use alongside subsonic ammunition.

The Mk57 Pistol and PSB kick off pricing at $1,349 while the BANSHEE series hits the market at $1,549. IV8888 and MrGunsandGear on YouTube have already taken a look at the design. Check out their opinions here: