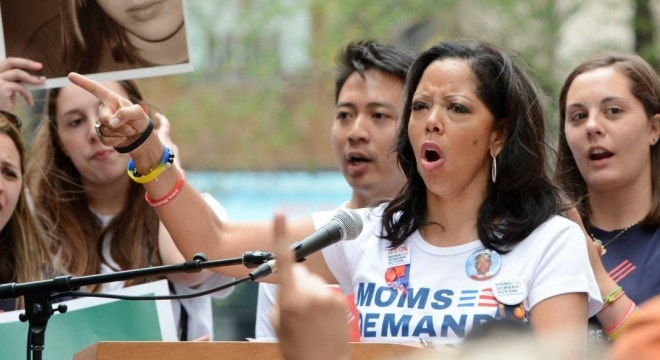 McBath has been a senior leader for Everytown and Moms Demand Action for five years and the group has thus far poured over seven-figures into her drive for Washington. (Photo: McBath via Twitter)

A woman who has been key to Everytown’s campaigns for the past half-decade won the Democratic primary this week for a chance to represent Georgia in the U.S. House.

Lucy McBath, whose son, Jordan Davis, was a victim in a high-profile murder in 2012, has spent the past five years as Faith and Outreach Leader for Moms Demand Action, and as a leader of Everytown’s Survivor Network. She narrowly edged out fellow Democrat Kevin Abel in the primary for Georgia’s 6th Congressional District on Tuesday, picking up just over 53 percent of the vote. McBath is now set to run against Republican incumbent Karen Handel this Fall, who last year picked up the endorsement of both the National Rifle Association and President Donald Trump.

“Georgia voters who value public safety now face a stark choice: Lucy McBath, who has devoted her life to ending gun violence, or Karen Handel, who previously earned the NRA’s toxic endorsement,” said Everytown President John Feinblatt in a statement. “Everytown is proud to stand with Lucy, whose heroic fight to fix our nation’s broken gun laws began with the senseless shooting of her son and who will soon be headed to the halls of Congress.”

The gun control group, bankrolled in large part by billionaire former New York Mayor Micheal Bloomberg, said in a release Tuesday that they have poured $1.2 million into McBath’s campaign so far, spread across television, digital, mail and radio advertisements — which would amount to all of her reported outside spending. The spots highlighted the mourning mother’s path to become an advocate for tougher gun policies and her promise to take on the NRA in Washington if elected.

From Capitol Hill, the activist-turned-candidate has received the warm endorsement from some of the loudest voices for gun control in Washington, including Illinois Sen. Robin Kelly, fellow Georgia Democrat John Lewis, and California Sen. Kamala Harris. As part of her platform, McBath, a retired Delta airlines stewardess, said she will, “push for implementing background checks for all firearm purchases; raising the minimum age to purchase a gun to 21 years of age; working to defeat conceal carry reciprocity measures; and introducing legislation to keep guns out of the hands of domestic abusers and other criminals.”

Georgia’s 6th District, which represents the northern suburbs of Atlanta, has been reliably Republican since Newt Gingrich won it in 1978 following the retirement of conservative “Dixiecrat” and former staunch segregationist, John Flynt. Handel bested Democrat Jon Ossoff in the most expensive Congressional race in history last year, although she was grossly outspent.