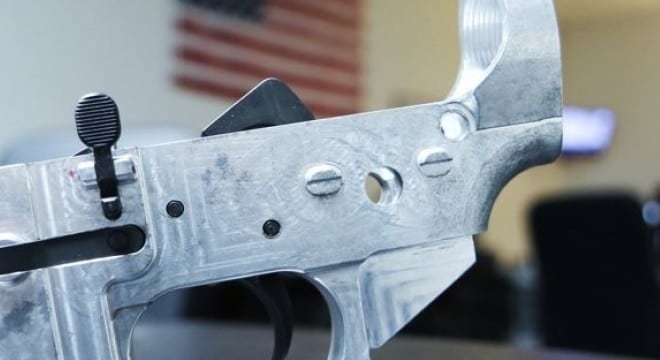 Defense Distributed is set to post for plans for their own single-shot Liberator pistol as well as more traditional firearms such AR-10 and 15 rifles, Czech vs. 58s, Beretta M9s, and Ruger 10/22s (Photo: DefDist)

With Cody Wilson’s Texas-based Defense Distributed set to publish free 3-D electronic files for several popular firearm designs as early as July 27 as part of a negotiated settlement with the federal government, almost every group on the left of the conversation on gun policy is up in arms to stop it — with a little help from Democrats.

In a nutshell, the State Department granted Wilson’s group an exemption to post plans for “non-military” semi-auto firearms under .50 caliber online by dropping its contention that they violated federal export control laws by posting them in 2013.

However, with news of the looming settlement circulating far and wide on mainstream media, the three largest national gun control groups — Brady, Everytown, and Giffords — banded together to intervene in the legal case, now in an Austin federal court.

On Wednesday, the groups submitted a 22-page filing seeking a temporary restraining order in the settlement, arguing that to allow DefDist to publish the files — some of which have been in the public domain for decades and are already widely available in multiple formats — would cause “immediate and irreparable harm” and contribute to the arming of felons and terrorists.

The move by the gun control groups is not the only legal effort underway. In New Jersey, State Attorney General Gurbir Grewal on Thursday sent a cease-and-desist letter warning of pending legal action to DefDist. The letter aruges that the company’s “widespread dissemination of printable gun computer files is negligent because it encourages an illegal gun market, which will foreseeably lead to increased crime and violence in New Jersey, and which will lead to an increase in expenditures of public funds for combatting crime and protecting our resident’s health.” Grewal stresses that if the plans go live and are accessible from New Jersey, he will likely see Wilson in court.

In addition to their legal own challenge, the high-profile gun control groups, as well as more than 40 smaller groups spearheaded by the Newtown Action Alliance, are mounting public drives to urge their supporters to reach out to Secretary of State Mike Pompeo and President Trump to halt the publication. Climbing atop the pile Thursday was Manhattan District Attorney Cyrus Vance, Jr., and Los Angeles City Attorney Mike Feuer, co-chairs of Prosecutors Against Gun Violence. The groups and prosecutors warn that no place on the globe would be safe from a flood of unserialized and possibly undetectable 3-D printed guns.

“Invisible to metal detectors, these plastic guns could easily be smuggled onto airplanes, and into concerts, festivals, and government buildings,” argued Vance in an email. “Untraceable, they would undermine the work of law enforcement by crippling criminal investigations before they even began.”

In Congress, U.S. Sen. Bill Nelson, a Florida Democrat, compared the 3-D gun files to bomb instructions in speaking on the Senate floor, saying he was ready to file legislation to prevent the information from getting out.

The administration's decision to allow people to post blueprints online about how to make a deadly 3D printed gun at home is inexplicable – and it's dangerous! I’m filing a bill ASAP to severely restrict the publication of these detailed plans on how to make a 3D printed firearm. pic.twitter.com/ogRLcHLJPO

Other Democrats on the Hill — to include Sens. Richard Blumenthal and Chris Murphy of Connecticut, California’s Dianne Feinstein and Ed Markey of Massachusetts — fired off a letter to U.S. Attorney General Jeff Sessions this week wanting answers on why the Justice Department agreed to settle the 2015 lawsuit and pay nearly $40,000 in legal fees to Wilson’s company and the gun rights group who backed the challenge.

Meanwhile, DefDist, which bills itself as “private defense tech development in the public interest,” has been largely radio silent across social media over the past two weeks other than to promote DefCAD, the controversial 3-D file management site. Earlier this month, the repository posted placeholders for plans for their own single-shot Liberator pistol as well as more traditional downloads for AR-10 and 15 rifles, Czech vs. 58s, Beretta M9s, Ruger 10/22s and others — notably designs that are all more than 40 years old and available as open source material elsewhere.

While other sites exist to share, cache and torrent similar files across various all levels of the internet iceberg, DefCAD said they are the only site of its kind “authorized in its work by the US government” and their goal is “to serve as a public good and an ongoing, standardized resource for the American rifleman and gunsmith.”