Anti-gun voter initiative approved in Washington, hit with lawsuits from 2A groups 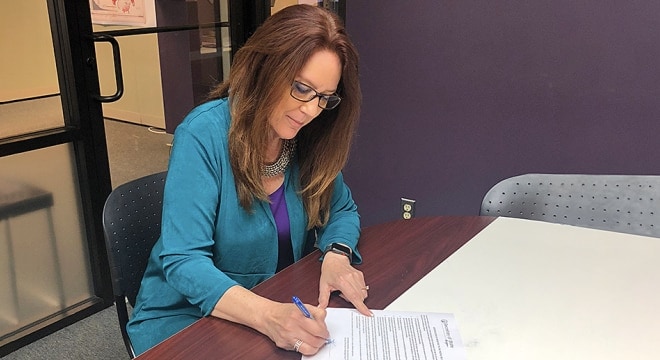 Washington Secretary of State Kim Wyman certified the I-1639 ballot referendum for the November General Election but said “concerns remain” about the legality of its signature sheets. (Photo: Wyman’s office)

Supporters of Initiative 1639 were approved to put a list of gun restrictions in front of voters on Friday, triggering new legal challenges by Second Amendment advocates.

Washington Secretary of State Kim Wyman certified the I-1639 “Gun Violence Prevention” ballot referendum for the November General Election after examining a random sample of 11,380 of the 378,085 signatures submitted by its sponsors. Wyman, a Republican, cautioned that “concerns remain” about the whether the format of the petition signature sheets complies with statutory requirements — as previously questioned by the gun rights groups — but said the initiative could move forward.

The news of I-1639’s approval was met with two lawsuits on Friday, filed by the National Rifle Association and Second Amendment Foundation in Thurston County Superior Court, each arguing the signature sheets were flawed and inaccurate.

“Secretary of State Wyman has a legal and constitutional duty to reject all I-1639 signatures obtained using fraudulent copies of this initiative,” said Chris Cox, head of the NRA’s lobbying arm. “It’s telling that the gun control lobby and their billionaire backers will break the rules and resort to dirty tricks in order to get their latest gun control scheme on the ballot.”

The lawsuit from the SAF saw its founder, Alan Gottlieb, filed as a private citizen and voter in the state. “This challenge maintains that because the initiative petitions were incorrectly printed, there isn’t a single valid signature on them,” he said in a statement. “It is essentially the same as signing a contract to buy a new Ford and they deliver a used Chevy. At the end of the day, it’s worthless paper. That’s not my fault, it’s the fault of the people behind I-1639 who apparently thought it didn’t matter to follow the letter of the law.”

The initiative aims to change the definition under Washington law of an “assault rifle” to effectively regulate all semi-auto long arms other than shotguns. The new requirements proposed alongside the definition would bar sales to those under 21 altogether. Those seeking to purchase an AR-15 or similar firearm would have to pass an enhanced background check, show proof of training, pay up to a $25 fee, and wait at least 10 days before picking up the gun from a dealer. There would be no exception to those who already have a concealed carry permit or have legally purchased a rifle before.

The Everytown-allied I-1639 backers, the Alliance for Gun Responsibility, have enjoyed big donations from high-profile billionaires with Microsoft co-founder Paul Allen and venture capitalist Nick Hanauer both chipping in $1 million each to the campaign. In past years the group was able to get I-594, an expanded background check initiative, approved by voters in 2014, followed by I-1491, a measure to make it easier to temporarily seize guns from individuals seen as being at risk, in 2016. They welcomed the news of I-1639’s approval last week.

Live shot of my reaction when we got the news from @secstatewa Kim Wyman that we are officially certified for the November ballot! Let's do this thing! #YesOn1639
— Stephen Paolini, Campaign Manager pic.twitter.com/mLYplqGzJv