Guns.com caught up with Bill Stewart, a lifelong shooter, collector, and industry professional to see what makes his cut for Every Day Carry (EDC). When asked about his EDC, Stewart was quick to lift the tails of his untucked t-shirt, revealing a well-hidden pair of carry weapons.

On his right hip sits a OWB concealed Glock Model 42. The Model 42 holds six rounds of .380 ACP, and Stewart points out that though the 9mm may be favored for concealed carry, he is confident in the .380’s stopping power given the ample offerings of premium self-defense ammunition. Plus, he appreciates the slightly smaller dimensions of the Model 42, which measures just 5.9-inches long, 4.1-inches in height, less than an inch wide, and weighs 17.2-ounces fully loaded. 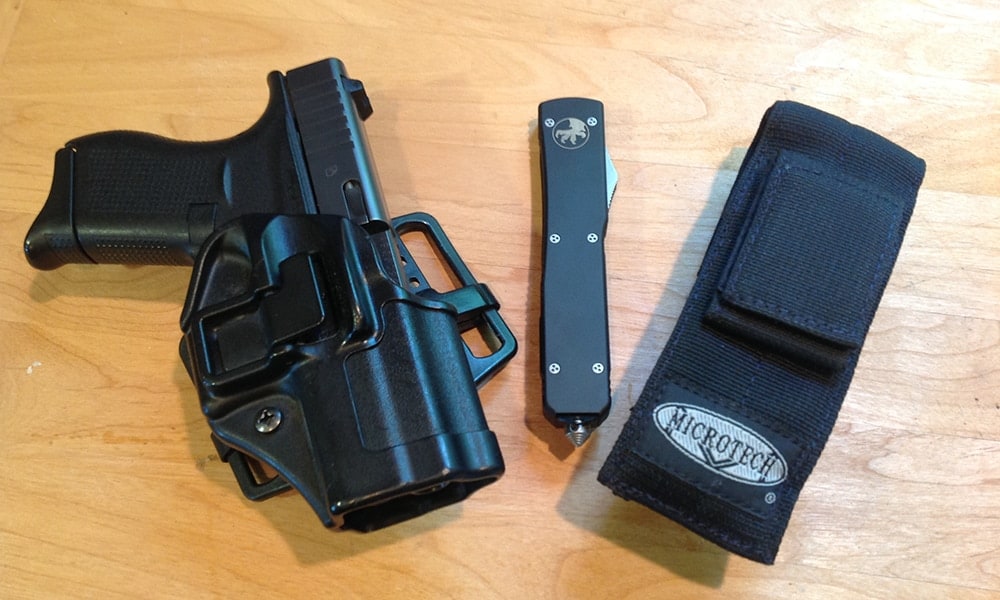 What good is a carry gun without a quality holster? Stewart’s choice of the Blackhawk! Serpa CQC points to an emphasis on safety with adjustable retention as well as easy access for the carrier. The AutoLock feature on the Serpa CQC means the user must depress the release with the trigger finger to allow the pistol to be drawn. Stewart demonstrates this several times, showing just how quickly the pistol can be out and ready for business. When asked if he’d ever consider changing up his EDC, Stewart says the only other CCW pistol he’d consider is the Ruger LC9, and if he made the swap, he’d still like a Serpa holster. Though he’s also a fan of small-frame revolvers, Stewart opts for semi-autos because of the ability to carry and quickly swap magazines.

Stewart forgoes a laser or advanced sights for the standard factory sights. His comfort level, no doubt, is driven by ample practice. The same goes for his Microtech EDC knife; the ability to deploy that backup weapon quickly is paramount to its usefulness in a stressful situation. 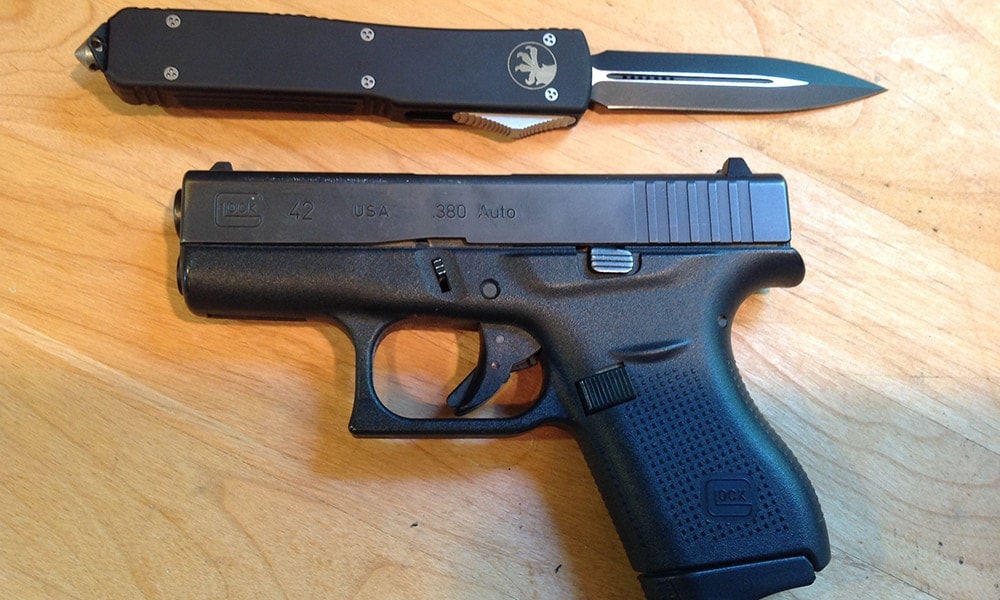 Stewart says he appreciates the the smaller dimensions of the Model 42 and economic design of the Microtech Ultratech knife. (Photo: Kristin Alberts/Guns.com)

The Microtech Ultratech is an automatic double-action knife with the Double-Edge (DE) blade. Though the knife includes a simple belt clip, Stewart opts to carry it inside the factory nylon belt case. The Ultratech also features a glass-breaker at the distal end, which Stewart appreciates having, just in case. Weighing only 3.2-ounces and with a 3.4-inch deployed blade, Stewart finds the Ultratech easy to carry. He was attracted to the quality of Microtech knives as well as the fact that the Ultratech’s design allows the firing spring to be at rest in both the open and closed positions, meaning less wear-and-tear on the mechanism. Stewart demonstrates several times how quickly and easily the blade is extended and retracted, and then stowed out of sight on his belt.

What do you think of Stewart’s EDC items? We’d like to hear about your EDC gear as well, so let us know in the comments below!