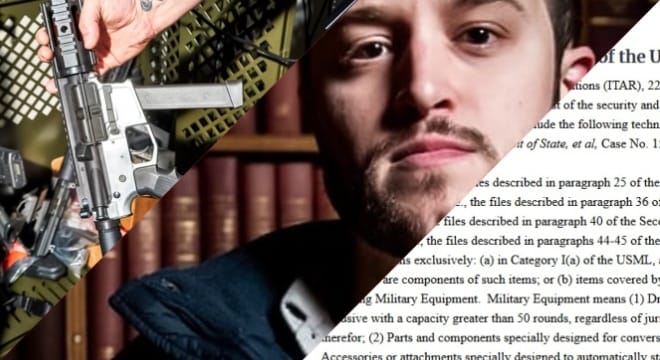 Cody Wilson’s Defense Distributed organization has won a series of legal victories against gun control groups and the federal government in recent weeks, going on to be granted an exception by the U.S. State Department to export controls on 3-D printed gun files. (Photos: Collage of images from DefDist/State Department)

A judge in a Texas federal court last week declined to side with gun control groups trying to stop the planned release of downloadable firearm files as states are mobilizing to block the information themselves.

U.S. Judge Robert Pitman, a sixth-generation Texan and 2014 appointment by President Obama, on Friday, denied a motion by the Brady Campaign, Everytown, and Giffords to intervene in the lawsuit between Austin-based Defense Distributed and the U.S. State Department.

The gun control advocates argued that the settlement reached between DefDist and the government would allow felons and terrorists to download 3-D files that could assist in unregulated firearm manufacturing. Pittman held the groups lacked standing and, declining to grant a request to halt the pending publication of the files, dismissed the case.

Wilson, who catapulted to controversy in 2013 when he first released online plans for his 3-D printed single-shot .380 Liberator pistol that quickly garnered over 100,000 downloads, has been mired in legal combat with the State Department ever since as the feds argued the availability of the plans, which recognized no borders, was a violation of International Traffic in Arms Regulations.

DefDist filed suit against the Obama administration in 2015 with the help of the Second Amendment Foundation, before the State Department switched gears last month and moved to grant Wilson’s company a special exemption to ITAR regulations on Friday, allowing him to post a variety of non-military small arms files on DefCAD.com.

“The State Department has made a dangerous and baffling mistake,” said Nick Suplina, legal policy director for Everytown. “For years, the State Department worked to prevent these deadly designs from going public, and it’s difficult to fathom why it suddenly reversed course on an issue with such clear consequences for public safety,” he continued. “Allowing unfettered access to these designs will enable felons, terrorists, and domestic abusers to create guns with ease and put public safety at risk.”

In response to a threat by New Jersey state Attorney General Gurbir Grewal and Los Angeles City Attorney Mike Feuer last Thursday warning DefDist of pending legal action should the company allow residents there state to download the controversial files, Wilson fired back Saturday with a lawsuit against the two, arguing they are violating First Amendment free speech protections.

In the 16-page filing, attorneys for DefDist hold that Grewal and Feuer “have waged an ideologically-fueled program of intimidation and harassment against” the company, intending to drag Wilson “before all manner of far-flung criminal and civil tribunals in an effort to silence the organization.”

Seeking damages and attorney fees, attorneys Alan Gura and Josh Blackman outline the threats of litigation from Grewal and Feuer also illegally interfere with DefDist’s lawful business under the Dormant Commerce Clause, which restricts the powers of states to get involved in federally-protected interstate commerce.

Pending the outcome of the challenge, Wilson’s group has blocked IP addresses in Los Angeles, New Jersey, and Pennsylvania– where a similar case was made in a Philadelphia federal court on Sunday– from downloading DefCAD files.

“Defense Distributed’s mission, & the federal gov’t abdication of their responsibilities, forces my hand into fighting an obscene proposition,” said Pennsylvania Attorney General Josh Shapiro, like Grewal and Feuer a Democrat. “We have laws in place to keep people safe, & during a time when students aren’t safe in their own classrooms, we need more help – not less.”

.@GovernorTomWolf, @PAStatePolice & I understand this, we know what's at stake, and we will do whatever is necessary to ensure that people can't just print a deadly weapon on a whim. pic.twitter.com/B2iCY1RsjP