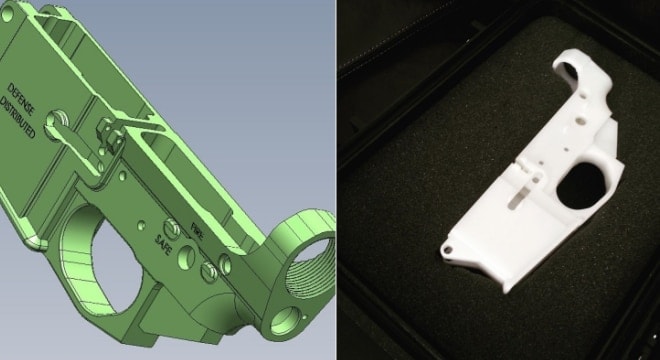 While Defense Distributed made headlines by making a plastic 3-D printed single-shot pistol in 2013, the company has moved on from there and now plans to offer nearly a dozen files including those for AR-15s. (Photos: DefDist)

From coast to coast, attorneys general and legislators at multiple levels are reacting to a relaxation of controls on downloadable gun files.

With recent court wins by Austin-based Defense Distributed against the federal government and a trio of large gun control groups, the company is set to go live on Wednesday with downloadable CNC and CAD files for nearly a dozen popular — and often public domain — firearms.

However, on Monday, a group of 21 attorneys general fronted by Maura Healey of Massachusetts penned a letter to U.S. Attorney General Jeff Sessions and U.S. Secretary of State Mike Pompeo to scrap the settlement with DefDist, holding the company’s actions are reckless.

“The federal government is trying to allow access to online plans that will allow anyone to anonymously build their own downloadable, untraceable, and undetectable gun,” said Healey. “This is an imminent threat to public safety and violates the law. We have a responsibility to ensure that these files are not made easily available to the public.”

Washington state Attorney General Bob Ferguson, in addition to co-signing Healey’s letter to President Trump’s administration, joined with seven other signatories to mount a legal challenge against the State Department and DefDist over the settlement. The 52-page lawsuit filed in a Seattle federal court seeks a nationwide temporary restraining order barring the federal government from lifting export controls for the files in question and preventing the gun company from posting the files online.

“I have a question for the Trump Administration: Why are you allowing dangerous criminals easy access to weapons?” Ferguson said in a statement. “These downloadable guns are unregistered and very difficult to detect, even with metal detectors, and will be available to anyone regardless of age, mental health or criminal history. If the Trump Administration won’t keep us safe, we will.”

Currently, DefDist has blocked IP addresses from Los Angeles, New Jersey, and Pennsylvania from accessing their DefCAD website, first running visitors through Cloudflare’s content delivery network before routing them to the site. This came as the company is fighting off legal challenges filed last week by state attorneys general Gurbir Grewal and Josh Shapiro along with Los Angeles City Attorney Mike Feuer.

On Capitol Hill, a group of Democratic Senators led by New Jersey’s Bob Menendez is promising to file legislation on Tuesday to halt the distribution of 3-D printed gun files. Likewise, U.S. Rep. Frank Pallone, D-New Jersey, said he intends to introduce a bill to ban the production of firearms printed using such designs, a facet which could have bigger implications not only for home builders but licensed gun manufacturers using the process as well.

“I think we’re going to have to ban the design as well as the production of them, you know, on a machine,” said Pallone. “We might also have something about warnings, you know, that says that, you know, it’s illegal under federal law to use this machine for that purpose, so various things that we’re thinking up. But basically, it would be banned, yes.”

Meanwhile, in New York, state Sen. Brad Hoylman, a Manhattan Democrat, said he is filing legislation crafted in concert with Giffords to require home gun makers in the Empire State to first obtain a gunsmith license and obtain a serial number from state officials before embarking on their project.

As for DefDist founder, Cody Wilson, he is fighting back with lawsuits of his own on states attempting to block the spread of his company’s files, while doing a little trash talk on social media to boot.

This man will pay me https://t.co/Zhu64Nuqvl