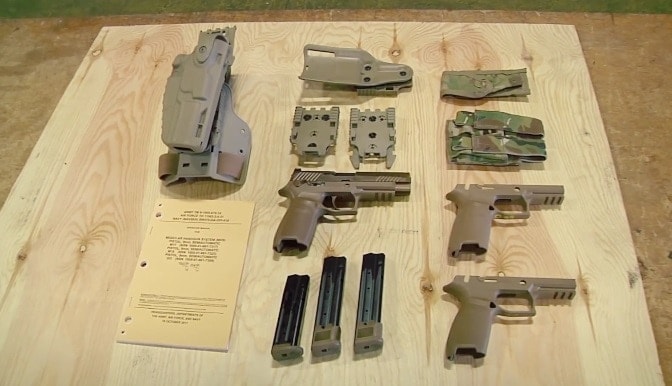 The Pentagon announced Monday that a Virginia-based distributor won a contract to supply holsters for the Army’s new Modular Handgun System.

Atlantic Diving Supply was awarded a $49 million firm-fixed-price contract for the Modular Handgun Holster to be used with the M17 and M18 pistols adopted last year by the service. While the numbers and type of holster to be supplied were not disclosed, and ADS declined to comment on the award when contacted by Guns.com, the large Virginia logistics company, specializing in blanket GSA contracts, include in their supply chain a number of holsters by Safariland, S&S Precision, LBT, and Raptor, among others.

Images of M17s fielded with the Army currently in circulation often show Safariland’s Level III 7TS holster series in use with smaller contracts recently issued for the 7TS in its Automatic Locking System variant. Additionally, the Army has issued limited contracts for inside-the-waistband holsters for the smaller M18 variant of the MHS, made to accommodate the Inforce APLc compact weapon mounted light for delivery to Fort Bragg, home to several special operations units. The Bragg contract was filled by Florida-based High Noon Holsters, who did not respond to Guns.com when asked for comment.

According to the award announcement this week, ADS beat out five other companies for the winning bid. Issued through the U.S. Army Contracting Command at Aberdeen Proving Ground, Maryland, the contract is expected to run through 2023.

The M17 and M18, both variants of Sig Sauer’s P320 modified to meet military requirements, vary slightly in size, and are to replace the full-sized Beretta 92 (M9) and the more compact Sig P228 (M11) in military service. All four are in 9mm.