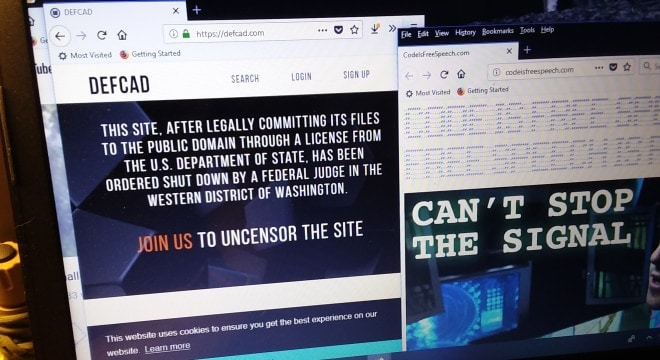 A federal judge in Seattle on Tuesday sided with a group of state attorneys general and granted a temporary restraining order against the planned release of downloadable gun manufacturing files.

U.S. District Judge Robert S. Lasnik agreed with eight states led by Washington state Attorney General Bob Ferguson in blocking Texas-based Defense Distributed from posting the downloadable 3-D CAD and CNC files. The file release, which had been set for Wednesday, was part of a negotiated settlement between DefDist and the U.S. State Department over the applicability of export controls on the information, which the government had long felt was a violation of regulations on the international transfer of munitions.

Lasnik, a former King County prosecutor and 1998 appointment to the federal bench by President Clinton, conceded that, while the restriction of the data inside the U.S. was never a concern for the State Department, the public safety risk argued by Ferguson and his allies made a certain sense. “If an injunction is not issued and the status quo alters at midnight tonight, the proliferation of these firearms will have many of the negative impacts on a state level that the federal government once feared on the international stage,” he said, granting the restraining order pending an August 10th hearing.

DefDist’s dedicated site for the files, DefCAD.com, noted late Tuesday that it had been shut down. The group’s founder, Cody Wilson, further confirmed on social media that, “By order of a federal judge in the Western District of Washington, DEFCAD.com is going dark.” However, shortly afterward many of the promised 3-D files surfaced on a new site backed by a number of gun rights groups.

Genie out of the bottle

A project of several Second Amendment groups to include the Firearms Policy Coalition, the Calguns Foundation, “and a number of individuals who are passionate about the Constitution and individual liberties,” Code is Free Speech.com went public just hours after DefCAD was blocked by the Washington-based court. The site on Tuesday offered freely downloadable code and instructions to make seven different firearms, mirroring the selection promised for Wilson’s site. The plans included machine code for the DefDist Liberator, the AR-10 and AR-15, the Czech vz. 58, Ruger 10/22, Colt M1911 and Beretta M9.

“Our Constitution’s First Amendment secures the right of all people to engage in truthful speech, including by sharing information contained in books, paintings, and files. Indeed, freedom of speech is a bedrock principle of our United States and a cornerstone of our democratic Republic,” said the group in a statement.

While the site thanked “Cody Wilson and Defense Distributed for their courage, passion, innovation, and inspiration,” and provided a link back to Wilson’s Legio project of backers, it is not clear if he is associated with the group.

In addition to Code is Free Speech, online file-sharing communities specializing in 3D gun code such as FossCAD and GrabCAD were still online as of Wednesday.

John Laprise, an ICANN database expert weighed in on the likelihood of keeping the lid on downloadable files through legal means in a reply to Massachusetts Attorney General Maura Healey via social media.

“A 3D printing template is just a data file,” said Laprise to Healey, one of the parties plaintiffs against DefDist. “The Internet is notoriously good at distributing information people want suppressed. Trying to keep the design from Internet distribution is like trying to hold back the tide and ultimately will fail e.g. music/film war on filesharing.”

A 3D printing template is just a data file. The Internet is notoriously good at distributing information people want suppressed. Trying to keep the design from Internet distribution is like trying to hold back the tide and ultimately will fail e.g. music/film war on filesharing