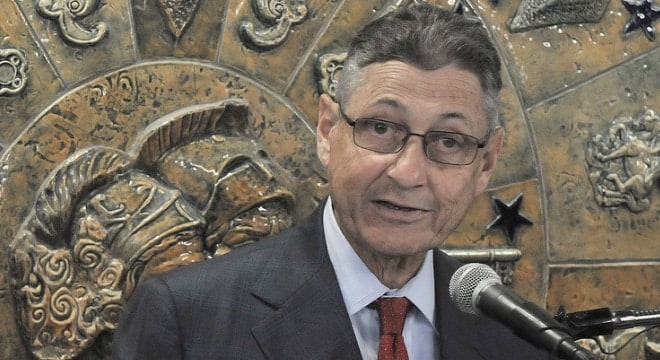 Sheldon Silver, who once held the keys to the New York Assembly, has been sentenced to federal prison (Photo: MTACC)

For the second time since 2015, Silver, a Manhattan Democrat, was unanimously found guilty after a jury trial in May of making millions off private schemes conducted in part through his public office. The ruling came following a retrial after his first conviction was overturned by an appeals court. In all, Silver is believed to have taken $4 million in bribes as well as pocketing another $1 million through money laundering the proceeds.

“When he assumed his powerful position at the top of New York State government, Sheldon Silver took an oath to do the work of the people,” said U.S. Attorney Geoffrey S. Berman in a statement. “Instead, he leveraged his tremendous influence to pad his bank account and line his pockets.”

According to court documents, agents from the FBI discovered Silver collected $700,000 in kickbacks for helping to arrange real estate deals in Manhattan that included using his position to enhance the property’s value. Prosecutors argued he also funneled more than $500,000 in state grants to a physician who in turn referred lucrative asbestos patients to Silver’s law firm. Those referrals generated fees to Silver worth over $3 million. Federal investigators said Silver collected more than $6 million from the firm for which he never actually performed any legal work.

First elected to New York’s 63rd District, which represents much of Lower Manhattan, notably Wall Street, in 1976, Silver became Speaker of the Assembly in 1994 and was subsequently re-elected 11 times. As such, Silver largely charted the course of legislation in the lower chamber of the New York state legislature for the past two decades. This included introducing the controversial gun control measure, the Secure Ammunition and Firearms Enforcement (SAFE) Act of 2013, to the Assembly and helping to rush it through Albany in record time.

At roughly the same time he was advocating increased gun control regulations in the interest of public safety, Silver was attempting to frustrate the Moreland Commission, a public corruption task force, eventually going so far as to file legal motions to block the Commission’s investigation into legislators’ outside income.

Silver, now 74, in addition to the prison time, was sentenced to three years of supervised release.