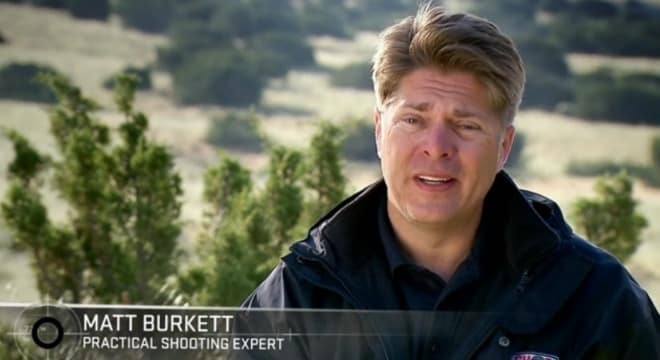 Burkett as an expert trainer on three seasons of the History Channel’s Top Shot program and later on NBC Sports Network’s 3-Gun Nation in a similar role (Photo: Screenshot)

A well-known competitive shooter and cable channel personality this week entered a guilty plea in a case involving defrauding a gun dealer of $50,000.

Matt Burkett, 46, of Scottsdale, Arizona, admitted guilt to an outstanding wire fraud charge in a Missouri federal court on Wednesday.

Court documents in the case show that Burkett, fronting his Predator Tactical brand of custom firearms, met St.Louis-area gun shop owners in 2012 during a large convention for a national Second Amendment member organization and later accepted large sums of money for his planned Night Shrike pistol but never delivered the promised guns.

At the time of the deal, Burkett had a well-developed national profile in the gun community after a string of IDPA competition victories. He appeared on-screen as an expert trainer on three seasons of the History Channel’s Top Shot program and later on NBC Sports Network’s 3-Gun Nation in a similar role. In addition, he marketed a series of practical shooting DVDs and was extensively profiled in trade publications.

Since then, he was not only charged in February 2017 over the case of the custom 1911 pistols that were sold and never delivered, but was also subsequently arrested in Arizona for testing positive for meth while under court supervision.

In 2016, Predator Tactical was acquired by Scottsdale-based Industry Armament who began marketing a Burkett-branded line at industry trade shows before the competition shooter was indicted. It is not clear if IA is still operating, as their social media accounts are inactive and a request for comment from Guns.com was not immediately answered.

According to the St. Louis Post-Dispatch, Burkett faces eight to 14 months in prison when sentenced in October as part of the terms of his plea, which was negotiated by the public defender’s office.