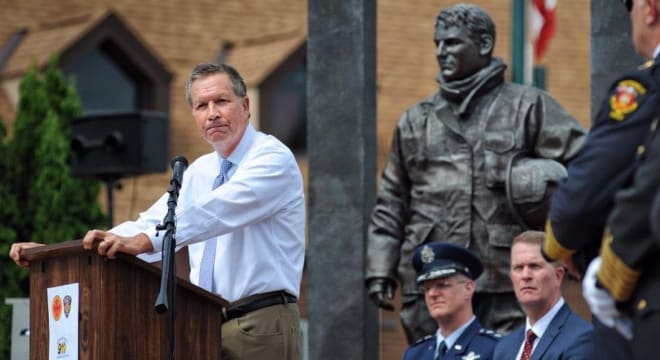 Kasich, a Republican who has increasingly come out in support of gun control measures, declined to sign a bill waiving fees for veterans and active duty military last week. (Photo: Governor’s office)

Ohio Gov. John Kasich refused to sign a bill waiving fees for active duty military and veterans who apply for a concealed handgun license in protest over a gun control impasse.

The Republican allowed SB 81 to become law without his signature on Friday, arguing that lawmakers missed the chance to enact gun control measures this session in the wake of a high-profile school shooting in Parkland, Florida.

Jon Keeling, Kasich’s press secretary, said that while the bill cutting fees for service members and vets “has merit and the governor’s support, he believes that the next piece of gun-related legislation that he signs needs to be the package of common sense reforms that has been introduced and which will provide valuable tools to reduce gun violence.”

In March, two weeks after the shooting at Marjory Stoneman Douglas High School that left 17 people dead and added momentum to a push for changes on gun policy, Kasich backed a six-part plan of proposed new regulations pitched to state lawmakers. The package included banning bump stocks, changing Ohio law to mirror federal regulations on armor-piercing ammo, straw buys, and gun surrenders due to domestic violence charges, as well as instituting a so-called “red-flag” bill to allow for temporary gun seizures in cases where an individual is thought to be a threat to themselves or others.

While the governor’s office argued such ideas had bipartisan support, Second Amendment advocates from National Rifle Association, Buckeye Firearms Association and Ohioans for Concealed Carry criticized the measures as well as Kasich himself at the grassroots level and in the end the bills never left committee.

The gun legislation that did pass, SB 81, waives the $67 fee to obtain a concealed handgun license for applicants who honorably served in the U.S. military or are on active duty. Further, the bill accepts prior military training in lieu of otherwise mandatory gun safety training required to obtain a license. The bill was approved in the Senate 31-2 in January and the House in June by an 84-7 margin, making it veto-proof.

“Members of the military are arguably the most responsible and best-trained group of gun owners in the country,” said state Sen. Lou Terhar, R-Green Township, who sponsored the new law. “This bill improves public safety by removing a financial barrier for our military members and veterans to protect themselves, family and community—which we should all welcome and encourage.”