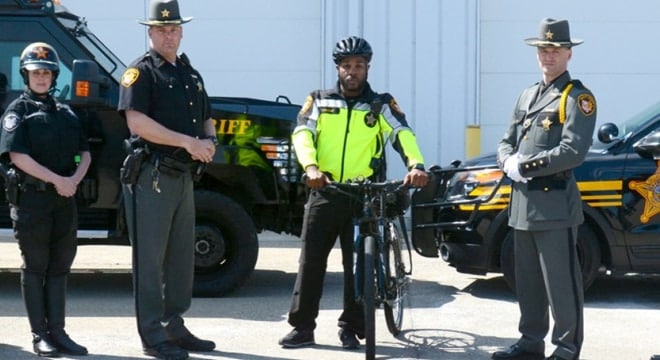 The Franklin County Sheriff’s Office has over 1,000 employees in a wide range of roles, and recently chose a trio of Sigs to equip their force. (Photo: FCSO)

The sheriff’s office for the most populous county in Ohio recently selected two 9mm Sig Sauer handguns as well as a rifle from the same company to outfit their deputies.

Sig Sauer announced last month that the Franklin County Sheriff’s Department has chosen to equip their deputies with model P226R pistols as their official sidearm. In addition, the agency chose Sig’s M400 rifle as their standard patrol rifle and the compact P239 handgun for their detectives.

“With this acquisition, the Franklin County Sheriff’s Department will, for the first time, be issuing a standard duty pistol to every certified officer on our force,” said Captain James Simmons with the agency, the largest sheriff’s department in the state. “We chose Sig Sauer’s P226 as our standard issue pistol after an extensive testing and review process and feel this is the best choice for our force.”

According to the Columbus Dispatch, each of the 600 P226Rs will be bought through local supplier Vance Outdoors for $590, less a $101,000 credit in exchange for the agency’s old guns. The guns will be replacing a variety of personal firearms and an increasingly finicky selection of S&W handguns bought by the sheriff in 1997.

The P226 is the Sig’s classic double-stack handgun, first introduced in 1983 as a derivative of their single-stack P220, which in turn was developed a decade before for the Swiss Army. Currently offered in 9mm, .357 SIG and .40 S&W chamberings as well as DA/SA and DAO variants, the full-sized hammer-fired pistol has long been popular with military and police forces, once competing favorably against the Beretta Model 92 in the U.S. military’s Joint Service Small Arms Program handgun trials in the early 1980s.

Similarly, the P239 is a legacy compact single-stack long-offered in the same three calibers, although Sig no longer includes it on their website. FCSD has selected standard black-on-black models in both handguns, chambered in 9mm and equipped with plastic grips.

Franklin County, home to a population of some 1.3 million, the city of Columbus and Ohio State University, employs more than 300 deputies in their jails, almost 200 in security units as well as another 127 in patrol duties in addition to special detachments such as K9, SWAT, mounted and bicycle patrols.