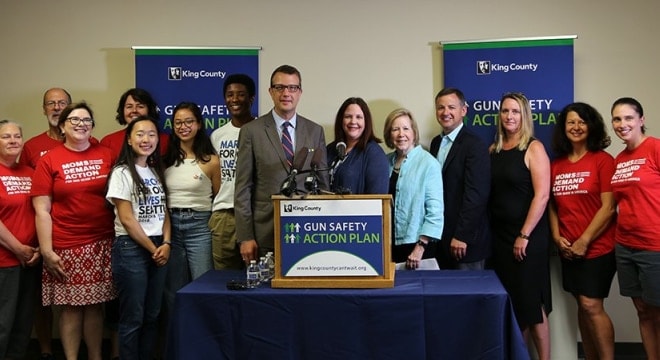 A proposal in King County, Washington aims to enact a host of new regulations and policies on guns in the name of public safety.

At the end of July, Joe McDermott, the Democratic chair of the King County Council, introduced his Gun Safety Action Plan in conjunction with an opinion piece he penned for The Seattle Times. The package would up the county’s current rules on guns while lawmakers would lobby Olympia for an end to Washington’s preemption statute after which more restrictive ordinances and bans could be implemented.

“Guns are used to kill men, women and children at tragic rates here in King County and across our nation,” said McDermott, arguing local government must pick up the mantle of gun control. “Yet our national and state leaders continue to sit on their hands and do nothing. It’s unconscionable.”

Among the tenets of McDermott’ plan would be to force the county sheriff to destroy seized or surrendered firearms, require gun owners to lock up their firearms when not in immediate use, and conduct youth outreach on gun policy questions.

Further, the plan aims to make operators of shooting ranges and gun stores in the county of more than 2 million residents post signage warning of the “very real and significant risks to health and life inherent with firearm ownership” as well as making the contact information to suicide prevention hotlines available. Ranges and retailers that don’t post the signage would risk civil penalties of up to $100 per day.

“The goal isn’t to thwart gun sales or burden retailers,” McDermott told The Seattle Times. “This is about conveying information.”

Going past the initial package of requirements, should the county find a way to escape the current preemption law, McDermott plans to introduce bans on “semi-automatic, high velocity weapons” and certain detachable magazines along with moves to strip gun rights from those under age 21, institute a waiting period on gun transfers and require prior firearm safety training.

A number of gun control organizations who were on hand for the plan’s unveiling.