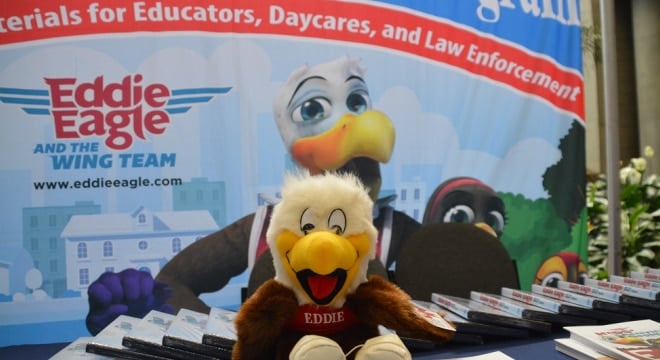 According to the NRA, the Eddie Eagle program started in 1988 and has taught over 30 million youth the basics of firearm accident prevention (Photo: Chris Eger/Guns.com)

More requests were received for the National Rifle Association’s child gun safety materials last month than any other month in the program’s history.

The Eddie Eagle GunSafe program, now in its 30th year, features the aforementioned anthropomorphic raptor and his crew in a series of gun accident prevention lessons geared to a Pre-K through 4th-grade audience.

In July, the NRA said they fielded some 250,000 requests for student workbooks highlighting the program’s “STOP! Don’t Touch. Run Away. Tell a Grownup,” mantra when it comes to firearms. The uptick, says the group, comes from law enforcement agencies likely ordering materials to use in community events, such as the National Night Out this summer.

According to the gun rights organization, the program started in 1988 and has taught over 30 million youth in all 50 states, Canada and Puerto Rico the basics of firearm accident prevention. Recently revamped, the group contends it is not about marketing guns to kids, just safety.

“Neither Eddie nor any members of his Wing Team are ever shown touching a firearm, and there is no promotion of firearm ownership or use,” the program’s website says. “The NRA does not make any sort of profit off the program, nor does it intend to.”

Since its inception, some 25 states have moved to incorporate elements of the program in gun safety training, according to the NRA. Recently these have included Louisiana, Idaho, and Kansas.

Eddie is not the only firearm safety program advocated by a pro-gun group. The National Shooting Sports Foundation’s own Project ChildSafe initiative dates to 1999 and has a similar approach to accident prevention coupled with free trigger lock kits. According to NSSF, they have distributed 37 million such locks over the past two decades and recently joined with the National Crime Prevention Council to feature McGruff the Crime Dog in a series of shorts.