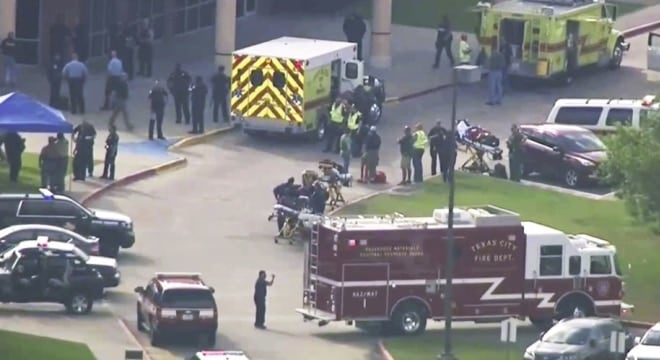 Lawmakers on a state school safety committee delivered their findings this week, opting against more gun control and in favor of “hardening” schools.

The 32-page report of the Texas Senate Select Committee on Violence in Schools and School Security was released Monday and sent to Lt. Gov. Dan Patrick. Convened just after the shooting this May at Santa Fe High School outside of Houston that claimed the lives of 10, the committee was given the mandate to examine the root cause of mass murder in schools and what could be done to both intercept high-risk potential threats and make campuses safer.

In submitting their report, the committee recommended a number of steps to make schools more secure by adding funding for cameras, metal detectors, and controlled entry points as well as exploring a school marshal program designed to arm some faculty members. This was in-line with Republican Gov. Greg Abbott‘s own 44-page school security plan advanced just weeks after Santa Fe.

Other changes would be increased mental health training for school staff and resources for students.

What was not recommended by the group was a move to implement extreme risk protective orders, popularly known as a “red flag” law, in Texas. Adopted by about a dozen states, including several so far this year, such laws allow family members or police to ask a court to temporarily suspend the gun rights of an individual thought to be at risk to themselves or others.

The committee listened to both sides of the argument on red flag laws in late July. While Moms Demand Action and advocates for Texas Gun Sense argued such schemes reduce suicide rates and fill a perceived gap in existing protective order laws, a pair of Second Amendment attorneys testified that such orders were not based upon mental health evaluations and could easily violate an individual’s rights. Many key Republicans, to include both Abbott and Patrick, had voiced opposition to such orders in recent weeks.

In the end, the committee simply recommended that the state’s current laws on domestic violence be reviewed to clarify when a convicted abuser can legally possess a firearm.

“School security will be a top priority for me in the upcoming legislative session,” said Patrick following the release of the report. “My goal is for every parent to know their child is safe in their school and for no child to feel afraid. The Select Committee’s report will help us begin work in the next session to reach that goal.”

Meanwhile, the school district containing Santa Fe High School approved $1.5 million last month in security upgrades to their facilities before the start of this school year. The move was championed by Patrick, who is backing legislation that would make matching funds available for such improvements.

I issued the following statement today in response to the Santa Fe Independent School District Board of Trustees vote last night to install metal detectors at the entrances to their schools before the school year begins this year. #txlege pic.twitter.com/BIzJ8DHVGm