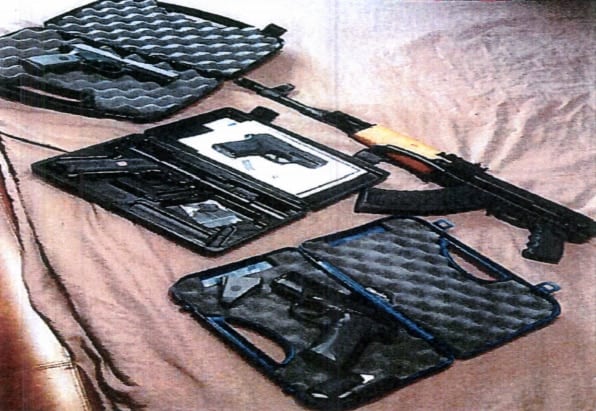 Some of the guns Klint Kelley, 28, sold to a convicted felon turned confidential informant. (Photo: ATF/PACER)

An Arkansas man will spend seven years in prison after admitting he sold nearly two dozen firearms to a convicted felon in Chicago last year.

Klint Kelley, 28, pleaded guilty in March to one count of unlawfully engaging in the business of dealing firearms after selling an old friend turned confidential informant 21 guns in April, July and September of last year.

“In a city that has seen shootings and homicides in astronomical numbers, illegal transportation of firearms and to a known convicted felon should not be tolerated,” Assistant U.S. Attorney Tobara S. Richardson said last month. “Defendant knowingly engaged in criminal conduct that contributes to one of the worst aspects of the city.”

Kelley moved to Malvern, Arkansas from Chicago more than a decade ago to escape the violence and strife of city life, according to a police affidavit filed last year. He knew the confidential informant for more than 15 years and admitted being aware of the informant’s prior felony convictions. Seized cell phone records proved Kelley traveled to and from the city during the same weekends he sold the informant guns.

“I know it don’t mean fuck to you, but these [referring to firearms] all came from a dude that told me they came from an old man and they’re not even hot,” he told the informant, according to court documents. “I mean, they’re all supposed to be legit. Not that that makes a fuck in the hands of whoever they end up in, you know what I mean.”

Kelley’s lawyer, Joshua Adams, requested his client serve just three years in prison, describing him as “a good person who made an extremely poor decision,” according to a report from the Chicago Tribune.

U.S. District Judge Ronald Guzman lacked any sympathy for Kelley, citing his forethought to avoid a paper trail leading back to the gun purchases. “He knew exactly what was going to happen to these guns,” he said. “I can’t think, at this point in the history of Chicago, of a worse crime for someone to commit.”