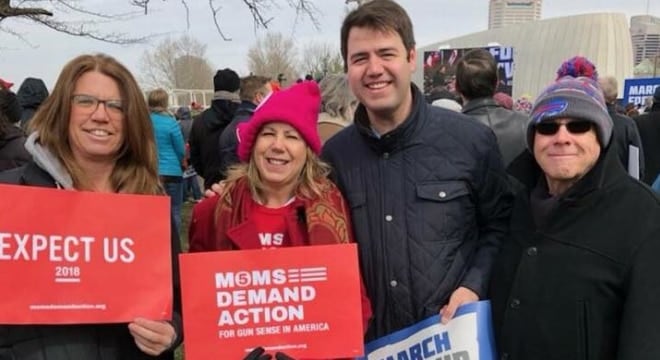 Democratic candidate Danny O’Connor was backed by Everytown and Giffords and labeled as a “gun grabber” by Second Amendment groups. (Photo: O’Connor for Congress)

A special election on Tuesday to fill an open seat in the U.S. House from Ohio is leaning towards an National Rifle Association-endorsed Republican who narrowly bested his opponent in a hard-fought campaign.

In Ohio’s 12th District, former state lawmaker Troy Balderson beat Democratic contender Danny O’Connor by just over 1,700 votes to pick up a 50.3 percent margin with 100 percent of the precincts reporting. Pending the tally of outstanding provisional and absentee ballots as well as the prospect of an automatic recount, Balderson will fill the seat left open following the resignation of Republican U.S. Rep. Pat Tiberi.

O’Connor was endorsed and supported by national gun control groups to include Giffords, Everytown and Moms Demand Action. “Danny is fighting to put the safety of Ohio communities ahead of the interests of the gun lobby in Washington DC,” said former U.S. Rep. Gabrielle Giffords in her endorsement last month. “He is a champion for gun safety who is bold enough to imagine a world where the type of violence we’ve seen is no longer a daily problem.”

In speaking about his platform, O’Connor said that AR-15s “do not have a place in our society” and that “no one needs a 30-round automatic magazine.”

Balderson, on the other hand, was given an endorsement and “A” rating from the NRA, a group that likewise graded O’Connor with an “F” on gun rights. In an alert, the Buckeye Firearms Association not only backed Balderson on his past record as a state legislator but labeled O’Connor a “gun grabber,” saying, “O’Connor has called for banning ‘assault’ weapons, is in favor ‘red flag,’ laws to seize guns without due process, and wants to prevent teachers from being armed in schools to protect kids.”

Spending by the candidates, as detailed by The Center for Responsive Politics, was roughly comparable, with Dems raising slightly more for O’Connor — $1.4 million — versus $1.2 million collected by Balderson. Backed by a coalition of labor unions, Planned Parenthood, and county Democratic parties, it was thought by some that O’Connor would be something of a canary in the coal mine to bringing a “blue wave” to the U.S. House this fall.

However, O’Connor, an attorney who formerly worked for the Franklin County Prosecutor’s Office and now serves as county recorder, is not throwing in the towel just yet. Late Tuesday he posted on social media that the race was too close to call and “we’re entering what could be a long and expensive recount.”

Folks, our race is too close to call.

And now we’re entering what could be a long and expensive recount.

Will you please chip in to help us make sure every vote is counted fairly? https://t.co/CEFdOwrXCN