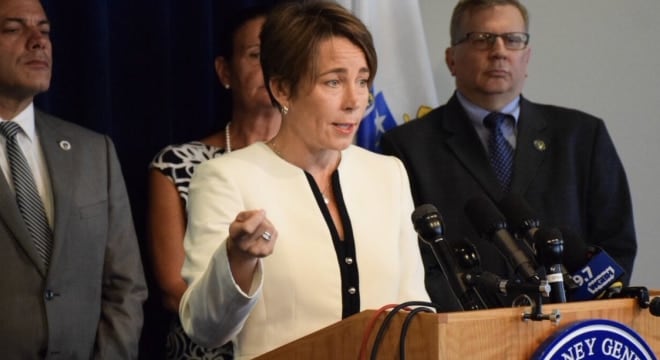 Maura Healey, a Democrat facing reelection in November, has been coming out swinging against 3D guns (Photo: Healey’s office)

A notice posted by Massachusetts Attorney General Maura Healey on Thursday warned that those who print 3D guns in the state risk both their freedom and treasure in doing so.

The warning, issued jointly by Healey and a number of the Commonwealth’s law enforcement lobby groups, holds that “creation, transfer, or possession” of a gun made with a 3D printer can open an individual to both criminal and civil liability under Massachusetts law. “These 3D-printed weapons will be used to evade Massachusetts’ strong gun laws, and my office and our law enforcement partners will do everything we can to keep deadly homemade weapons off our streets and out of our schools,” said Healey in a statement.

The one-page notice states that undetectable plastic guns violate state regulations on “covert weapons” in the same way as firearms disguised as items such as cigarette lighters. It should be pointed out that the firearm at the heart of Healey’s legal action against Texas-based company Defense Distributed, the 3D-printed Liberator, while constructed from extruded plastic, is designed to contain a block of steel to make it detectable to magnetometers, as required by federal law.

The Attorney General’s office also warns that possession of a gun without a state-mandated license is a crime, as is unreported transfers between private parties. Further, printing what is classified in the state as an “assault weapon,” a definition that has been controversially expanded by Healey in recent years, is also a crime, according to the notice.

Meanwhile, a preliminary injunction hearing in the case blocking DefDist from releasing their digital files online is scheduled for Aug. 21, with a host of states and gun control advocacy groups rushing to submit briefs to the Seattle-based federal court that issued the current temporary restraining order last week.