Rifle imports hit a seven-year low in 2017, according to the latest Annual Firearms Manufacturing and Export Report updated last month.

Dealers imported 572,309 rifles from nearly three dozen countries last year — a 22 percent decline over 2016 and nearly three times behind the record high of 1.5 million recorded in 2013.

Some 41 percent of last year’s imported rifles traced back to Canada. Savage Arms — a rifle maker headquartered in Massachusetts — operates a plant in Ontario and ships more than 97 percent of its inventory into the United States. The company faces changes ahead as parent company Vista Outdoor solicits buyers for the rifle maker as part of it’s new ammo-centric vision.

Meanwhile, Russian imports tanked nearly 71 percent over 2016, according to the report. Dealers bought more than 28,000 rifles from the country in 2016 — a number that plunged below 8,500 last year. German, Israeli and Serbian imports, likewise, declined by more than half. Rifle imports from Taiwan vanished, according to federal data. 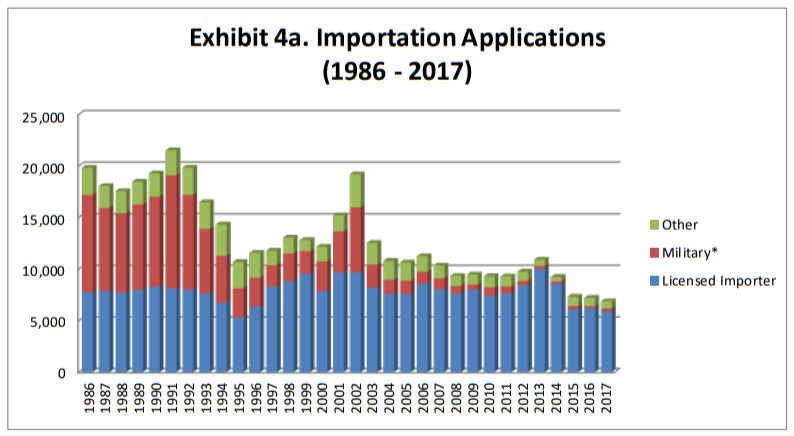 Imports for all firearm categories, including shotguns and handguns, declined double digits, totaling just under 4.5 million. The figure trails the record 2013 high by nearly 20 percent, according to the report.

Licensed importers declined for the fifth year in a row, hitting a record low of just 6,853 in 2017. The category continues facing pressure from ongoing trade sanctions and bans, despite high hopes President Donald Trump might “open the floodgates” for gun imports.