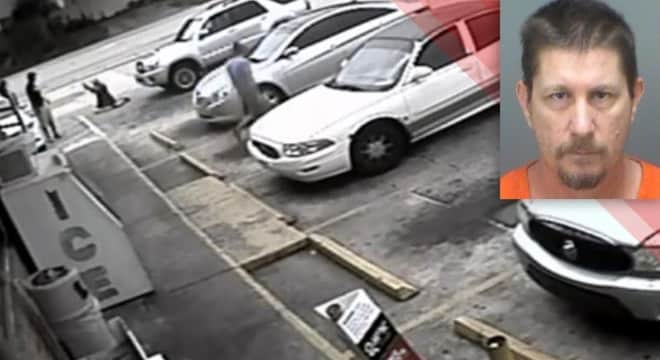 A composite photo shows a still from the Circle A Food Store surveillance video with a prostrate Michael Drejka in front of Markeis McGlockton on July 19, as well as a booking photo of Drejika from this week.

A man involved in a fatal shooting, which the local sheriff initially deemed did not justify an arrest, has been charged by the State Attorney’s office with manslaughter.

Michael Drejka, 47, was arrested Monday and booked into the Pinellas County Jail in connection to the death of Markeis McGlockton, 28, after an altercation between the two at a Clearwater convenience store last month. The case drew national attention after surveillance video of the July 19 shooting at a Circle A Food Store went viral.

The incident, an argument between Drejka and McGlockton’s girlfriend, Britany Jacobs, 25, over her parking in a handicapped parking spot without a handicapped placard, escalated when McGlockton, who had been in the store at the time, emerged and confronted Drejka, shoving him to the ground. Drejka, an armed concealed carry permit holder fearing a subsequent attack, pulled his handgun and shot McGlockton.

After an investigation of the incident and review of the footage, Pinellas County Sheriff Bob Gualtieri on July 20 announced the shooting did not meet the standard for his office to arrest Drejka, who he said feared for his life after he was slammed to the ground, under protections offered by Florida’s 2005 “Stand Your Ground” law.

The National Rifle Association and some Republican lawmakers subsequently disagreed with Gualtieri’s interpretation of Stand Your Ground in the case.

Supporters and family members of McGlockton, who was black, argued that the failure of police to arrest and charge Drejka, who is white, was a racist injustice, describing the slain man as a “gentle giant” killed in a “sanctioned murder.”

Last week the Pinellas County Board of County Commissioners unanimously passed a resolution to press state lawmakers to clarify Stand Your Ground in Florida to remove protections for those who “intentionally provoke confrontation and/or respond disproportionately with deadly force.” Board Chairman Kenneth Welch said there “is a real concern in this county about how this law is being interpreted.”

While the editorial board of the Tampa Bay Times and national gun control advocates supported the move this week by Pinellas County State Attorney Bernie McCabe to charge Drejka, Gualtieri distanced himself from the issue, saying, “I support the State Attorney’s decision and will have no further comment as the case continues to work its way through the criminal justice system.”

Drejka’s bond has been set at $100,000. Under state law, he will first undergo a self-defense hearing where McCabe’s office will have to successfully press their case against him before a trial date could be set.

Michael McGlockton, the father of Markeis, said he feels prosecutors made the right decision to charge Drejka.