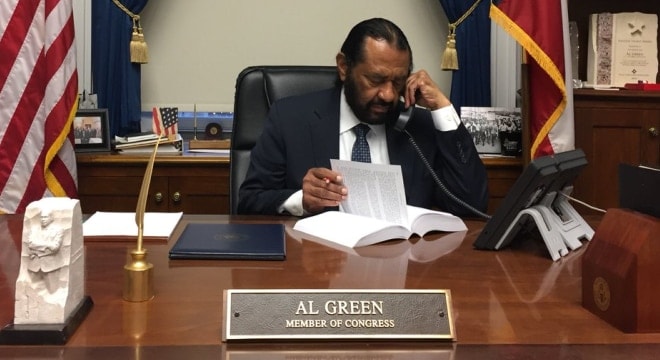 A plan proposed by U.S. Rep. Al Green, D-Tex, would make it illegal for a person without a FFL to transfer a firearm anywhere on the premises of a gun show, such as in the parking lot. (Photo: Green’s office)

A Democrat from the Lone Star state wants to make it against federal law for anyone not a licensed dealer to transfer a firearm at a gun show.

U.S. Rep. Al Green, who has represented southwestern Houston on Capitol Hill for the past decade, introduced H.R. 6654 to the House earlier this month which would punish those without a federal firearms license should they try to move a gun at a gun show. His bill, referred to the House Committee on the Judiciary, would make it illegal for a person to transfer a firearm at any event held for the purpose of buying, selling or exchanging guns unless they are a licensed dealer.

While federal law already requires those with FFLs to conduct background checks prior to a gun sale, regardless of if the sale is at their shop or a gun show, in many states the sale or trade of personal guns from private collections among individuals not barred from firearm possession is allowed, especially away from the show itself such in parking lots. Green’s bill aims to make such exchanges illegal under federal statute, with a punishment of as much as two years in prison and a $10,000 fine for each gun involved.

A sometimes controversial figure in the House who has weathered scandal in the past and supports the impeachment of President Trump, Green has a track record of support for gun control measures and has frequently been issued poor grades by Gun Owners of America and the National Rifle Association.

The proposal currently has no co-sponsors.