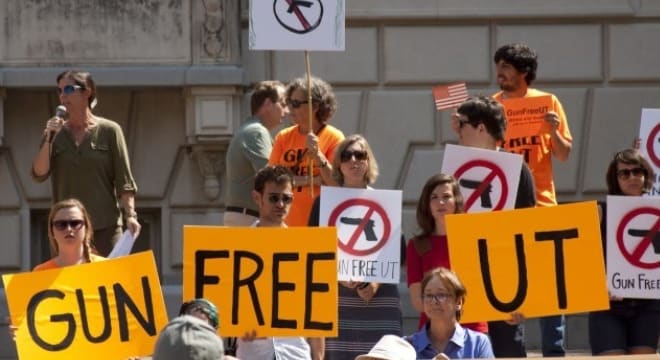 Three female professors at UT Austin filed suit over a campus carry law last year, arguing in part that it would limit their ability to talk about controversial subjects. (Photo: Gun Free UT)

A unanimous three-judge panel last week rejected a lawsuit by three University of Texas professors who do not want legal concealed carry in their classes.

The panel for the 5th U.S. Circuit on Thursday upheld Texas’ campus carry law, affirming a lower court ruling from last July. The judges found the professors could not prove their case, which largely centered on First Amendment grounds. The faculty members, three female liberal arts professors whose classwork sometimes touches on controversial subjects such as abortion and unwanted pregnancies, argued the carry of guns in their classes would chill open and frank discussion, thus hindering their right to free speech.

The professors include Dr. Jennifer Lynn Glass, the Barbara Bush Professor of Liberal Arts; Dr. Lisa Moore, the Archibald T. Hill Professor of English and Women’s and Gender Studies; and Dr. Mia Carter, an associate professor of English and Modern Studies. The professors filed suit against the state just weeks before the new campus carry law was to take effect in 2016 arguing that, since they cannot exercise their individual option to forbid handguns in their classrooms under the “well-regulated” clause of the Second Amendment, their due process and equal protection rights are being trampled in addition to squelching their freedom of speech.

In writing for the majority, Judge Leslie Southwick, a former Mississippi Court of Appeals judge appointed to the federal bench in 2007 by President George W. Bush, concurred with the earlier court that Glass did not have standing and “cannot manufacture standing by self-censoring her speech based on what she alleges to be a reasonable probability that concealed-carry license holders will intimidate professors and students in the classroom.”

Texas Attorney General Ken Paxton, named as a defendant in the suit which he previously described as being frivolous, praised the news from the court.

“The lawsuit was filed because the professors disagreed with the law, not because they had any legal substance to their claim,” Paxton said in a statement. “The right to keep and bear arms is guaranteed for all Americans, including college students, and the 5th Circuit’s decision prevents that right from being stripped away by three individuals who oppose the law enacted by the Legislature.”

Similarly, a Georgia court last week sided with the state in a lawsuit brought by a group of university professors seeking to suspend the state’s campus carry practices.