How to: Five tips for sighting in your hunting rifle (VIDEO)

It’s likely not the hunter’s favorite task, but properly sighting in a rifle and optic combo is a necessary one to having not only trust in your setup, but ultimately a successful hunt. While many breeze through sight-in day, Guns.com has five tips that will make your process a more enjoyable and productive one.

Some of the most useful sight-in information comes before you even hit the range. Once the scope is mounted and boresighted — which can either be done at home or your preferred gun shop, usually for no cost — let the planning begin.  This is where you engage the brain, taking into account your quarry, terrain, and narrow down your load options— that is, things like bullet weight and ammunition type. You may be shocked at difference in, say, .30-06 offerings and their impact when jumping from 150-grain to 220-grain bullets. In this case, we’re sighting in a .223 that will be used at extended ranges for varmints, so we have opted to go with 55-grain V-Max ballistic tip bullets. In addition, instead of zeroing at the average 100-yard mark, we’ll zero at 200 yards and also be prepared for 300-400 yard targets. If you can pick a calm, pleasant weather day for the process, that’s always a plus as well. 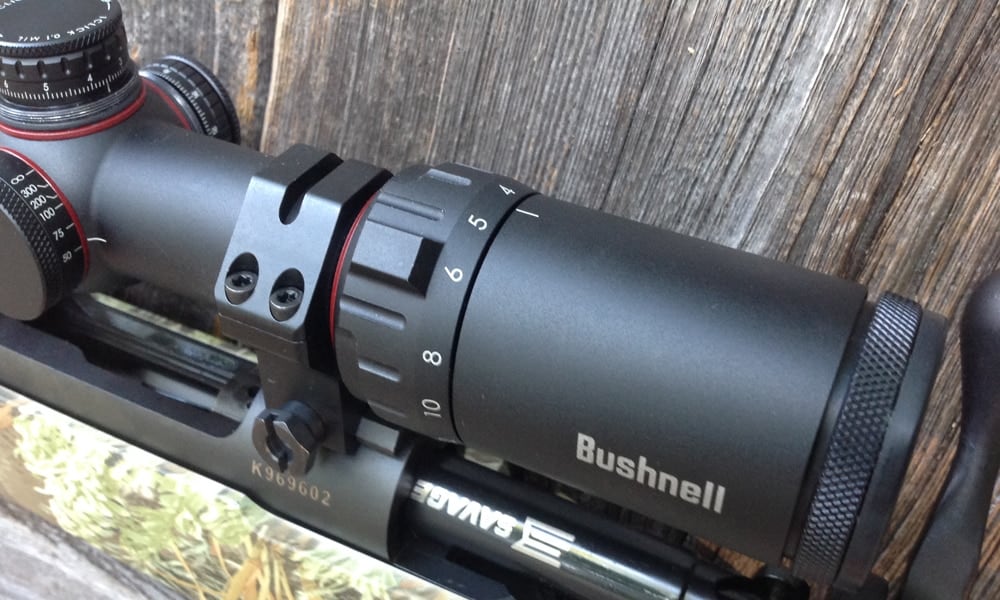 Get familiar with your riflescope ahead of time, and you’ll have a more successful and enjoyable sight-in day. Our Bushnell Nitro scope here is a FFP 4-12×44 and we’re zeroing at 200 yards. (Photo: Kristin Alberts/Guns.com)

Getting familiar with your optic ahead of time not only makes sight-in easier and more enjoyable, but will make you more confident and successful with rapid adjustments in the field. This also means knowing the difference between FFP and SFP scopes, if you’re venturing outside the norm as many new hunting scopes are built with longer-range shooting in mind.  In many cases, that means being aware at which magnification you’re zeroing. More importantly, check the fine print. If we’re sighting in at 100-yards with a MOA optic, we know that our scope’s turret adjustments mean four clicks equal one-inch of adjustment which is standard ¼ MOA. If you’re shooting at less or greater distance, remember that you need to increase and decrease the adjustments accordingly. That can save you both time and ammo on the range.

For purposes of sighting-in a rifle, eliminating as much user error as possible will make you certain the gun is ready as long as you are. To do that, we are using Champion’s Enhanced Rifle Rest, which grants ample stability without risking damage to the firearm. Along that line, we also do plenty of shooting from a Caldwell Lead Sled, but be aware that adding too much weight and restrictions on a gun to negate recoil can, will, and has led to many a cracked rifle stock. At the same time, it’s not necessary to clamp either the forend or buttstock in a rest; in fact, doing so can exert torque or pressure that may alter the point of impact. 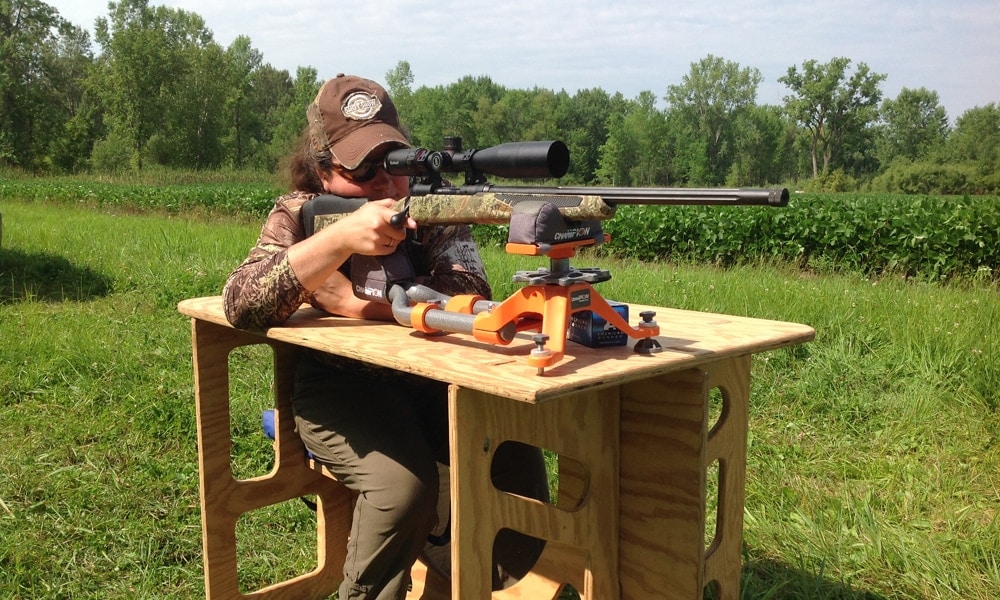 Eliminating as much user error as possible will make you certain the gun is ready as long as you are. (Photo: Kristin Alberts/Guns.com)

With the rest at the ready, be mindful of your own manipulation of the rifle. A light squeeze should be all that’s needed with the forward pad of your trigger finger, avoiding going to or past the first joint. Keep your forward hand off the top of the barrel; you don’t need to hold down the forend. In fact, we prefer to move that supporting hand rearward. At this point, we want that rifle on target with as few human factors as possible, and then we can get into full preparation before leaving the range.

While sight-in may not be your favorite pastime, speeding through it here could bite you in the end. First, don’t rush your shots. Ensure you’re on target, control your breathing, and analyze the impact. Did you pull the shot? Did it feel good? Never adjust the scope based on one shot alone; two and preferably three shot groups are the norm before using the adjustment dials. The second part of taking your time means allowing the barrel to cool. It’s easy to get frustrated and hurried while sighting-in, wanting to blast off groups, adjust, fire more, adjust, and continue that process until the barrel is so hot and dirty that point of impact can be affected. Sometimes, I like to bring along a field cleaning kit and give my barrel a quick clean in between extended shot strings. That not only allows the barrel to cool, but also ensures I know how my rifle fires both clean and fouled. 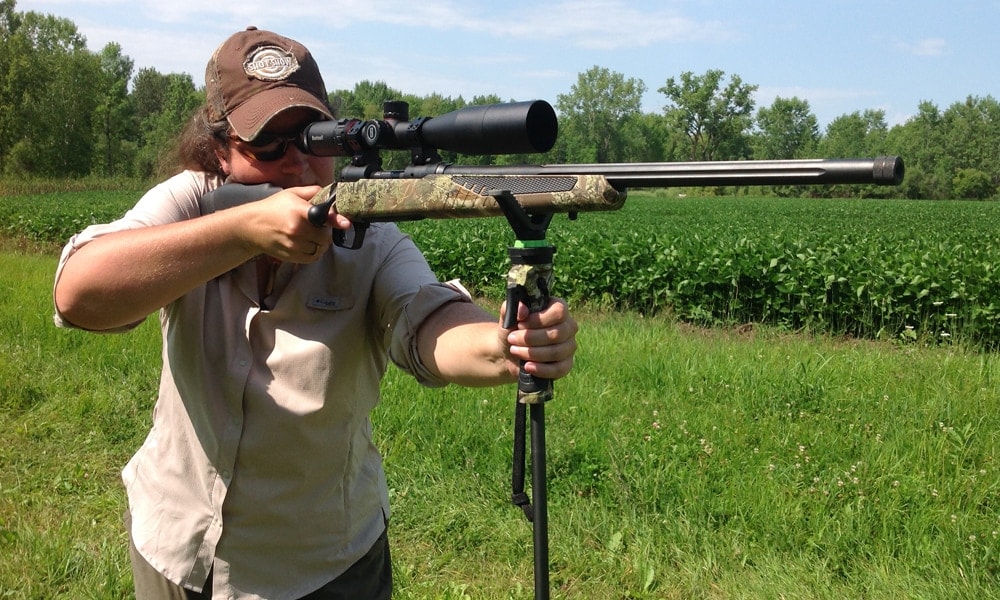 Hunters don’t hunt from a shooting bench, and the key to success lies in practicing how you’ll be hunting. If that means you use a bipod, sandbags, shooting sticks, or from positions like prone or sitting, do that before you leave the range on sight-in day. (Photo: Kristin Alberts/Guns.com)

Though we’ve talked about minimizing user error earlier by using a steady rest for sighting in, that applies only to sight-in, load testing, and true accuracy work. Hunters don’t hunt from a shooting bench, and the key to success lies in practicing how you’ll be hunting. If that means you use a bipod, sandbags, shooting sticks, or from positions like prone or sitting, do that before you leave the range on sight-in day. You might just be surprised how much your physical position or use of things like a bipod or sticks may change your point of impact once that rifle comes out of the cradle.  The same applies for the traveling hunter. Once you reach your destination, be sure to double check zero as both the jarring of travel and changes in altitude can affect final accuracy.

Just like that, not only is your rifle sighted in correctly, but you as a hunter should feel ready and confident in your setup. Nothing beats confidence and preparedness for a successful hunt. And one last caveat to leave you with, never pawn off the job of sighting in YOUR rifle. Nobody sets the scope, holds the gun, and fires quite like you, so don’t be lazy; sight in your own rifle and be an ethical hunter — and let us see those success stories in the comments.