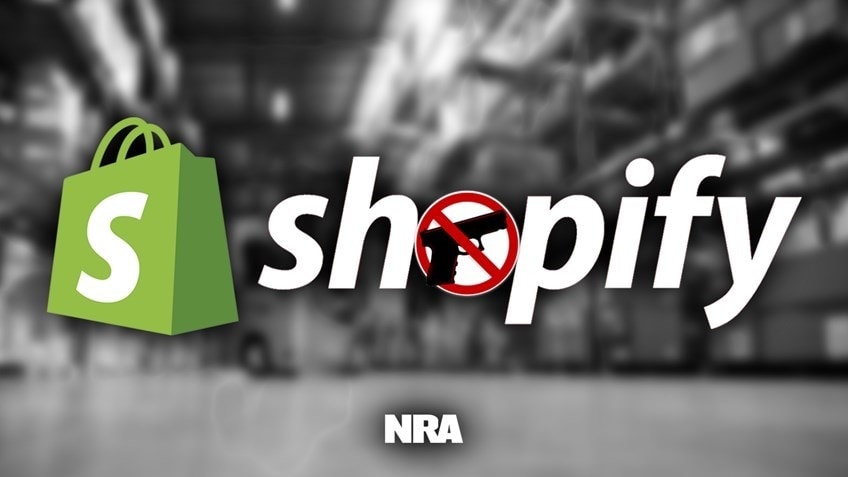 The NRA took a stand against Shopify last week suggesting the user policy change was unconstitutional and urging gun owners and businesses to reach out to Shopify and demonstrate their discontent. (Photo: NRA via Facebook)

Gun retailers still using Shopify’s e-commerce platform have until December 31 to either come into compliance with the new Acceptable Use Policy or hit the road, according to the latest email sent out to retailers last week.

Shopify, which brought the hammer down on retailers selling guns and gun parts, changed their user policy last Monday without any warning. A simple email notification, offering no explanation, was all retailers were given informing them of the update. Though a few people have reached out to Shopify for clarification on why the AUP was changed, to no avail, many retailers say they are too afraid to strike up a conversation with the e-commerce platform on why the update targeted gun-related companies.

“We’ve tried to reach out for clarification from Shopify but have yet to get a straight answer. Our fear is that we may be shut down at any time and without warning, so we’re trying as hard as we can to migrate to a new platform before we’re shut down,” Ike Stephens of Big Tex Outdoors told Guns.com in an email. “Since we carry a lot of products and have a complex website, this is a move that must be carefully done and it takes massive amounts of time to execute.”

Harrison Jones of Harry’s Holster told Guns.com that he too was nervous about drawing attention to himself before he could migrate his content offsite.

“We have not contacted them for fear of having a dispute and getting our site shut down,” Jones commented to Guns.com. “We will contact them once our Big Commerce site is operational and let them know why we left their platform and they are no longer able to charge thousands of dollars a year to Harry’s Holsters.”

Though the retailers Guns.com spoke to are all still operational, the toll this has taken on them is clearly evident. Despite no major losses in revenue yet, vendors have spent the last week heavily researching, vetting and moving their content and websites to other platforms — a process that is both time-consuming and nerve-wracking for some. Checking and re-checking links, verifying that plugins still work and exporting data like customers, past sales and products have left retailers exasperated and exhausted.

“We potentially could be without a website at any minute.  We are spending time and money searching for a new e-commerce company that will be 2nd Amendment friendly,” Casey Burke of Southern Guns explained to Guns.com. “We are also very concerned with our website going down on the search engines if we have ‘dead links’ from the website transition. At this time we also will be spending quite a bit of time learning a new e-commerce platform and the new plugins for their site.”

Laura Wedgle of 22Mods4All said that while her business hasn’t been directly impacted by the policy change, she and her team have expended quite a bit of energy on the move. “It has not had any impact on our business, but it will because time, effort and expense of moving to a new platform will be costly,” Wedgle said.

“For sure in the next month all I’m going to be doing is messing around with this new website trying to get it dialed in; because I’ve been working on the one that I had for almost five years,” Owner of 1911 Builders, TJ Osman told Guns.com in a phone interview. “And I was lucky that over the weekend that I had the chance to get it out.” 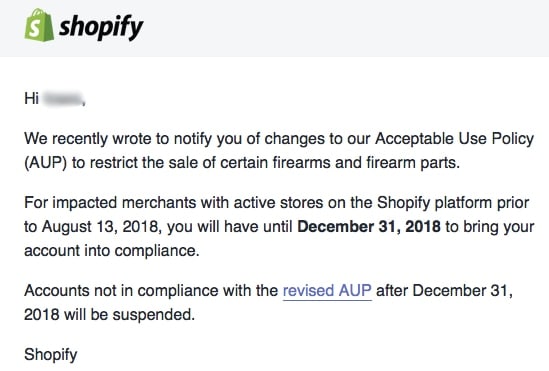 The latest email sent out to firearms companies alerting them to the impending deadline.

Though most retailers currently have access to their Shopify accounts and sites, the threat of sudden removal looms.  RMRBullets was not affected by the Shopify situation, but owner Jacob Wilcox knows all too well the dangers of sudden policy change and its impact on business. After the Parkland shooting, his credit card processor FirstData updated their policies to no longer include service from firearms-related companies. Wilcox says his story should serve as a cautionary tale to other retailers, urging them to abandon Shopify quickly before they too suffer the same trials as he.

“[First Data] sent me a letter saying that they could hold all our deposits up to six months. At the time we had over $40,000 in deposits that hadn’t been deposited into our account. I sent them a copy of our written agreement and informed them that I had contacted a lawyer and they were forcing me to sue them because I wouldn’t have enough money to pay my bills,” Wilcox said.

Ultimately, after it was all said and done, Wilcox said his battle against First Data wound up costing his small business. “The old website, new website, and paying for employee training and adding products to the websites probably cost us somewhere near $30,000,” Wilcox elaborated. “Not to mention the emotional stress and loss of sleep worrying about defaulting on our financial responsibilities.”

Cody Wilson, of 3D gun printing fame, was the first to see his website terminated two to three days prior to the policy change. Wilson told Guns.com last week that he believes the AUP update was the result of pressure from external resources aimed at silencing Wilson and his 3D movement. Regardless of the exact reasoning, gun companies say the anti-gun perspective, in any capacity, is short-sighted for large commerce sites.

“Shopify is downplaying the consequences of this move to ban sales of firearms and firearms parts & accessories to its investors and those reporting on the story. They just closed the door on a $26 billion (legal) industry based on faulty logic,” Dustin Pitcher of AR-15 Discounts detailed. “Younger tech companies seem to have a hard time preventing their ideological positions from influencing their business decisions. This happens to be a poorly thought-out and self-contradicting ideological position but plenty of smart people at large companies have made this same mistake.”

Companies like Big Commerce, Magento, and Uinta Trading Co are offering a new home for displaced gun companies looking to move off-site before the December deadline.