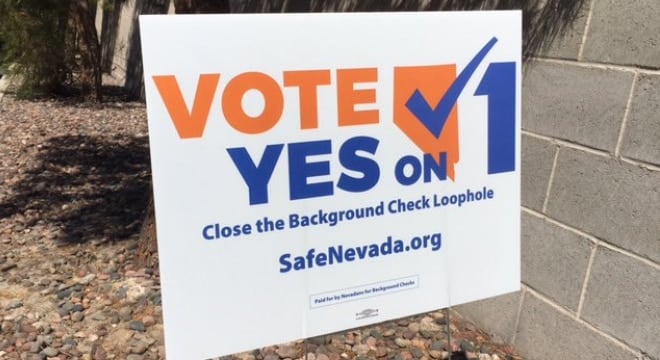 Question 1 was backed by gun control advocates to a narrow victory at the polls but has been in a holding pattern since 2016 as state officials argue it is unenforceable. (Photo: Nevadians for Background Checks)

A Nevada judge is backing the choice by state officials to refrain from implementing a voter-approved universal background check law that never took effect.

The measure, Question 1, secured a thin margin at the polls in 2016 but was suspended by Nevada Attorney General Adam Laxalt over concerns on how it would be applied. With Laxalt backed up by Nevada’s Republican governor, Brian Sandoval, gun control advocates behind the initiative to conduct background checks on every firearm transferred in the state took the matter to court, a case that was rebuffed late Monday.

Clark County District Court Judge Joe Hardy Jr. characterized the arguments used by the measure’s supporters as “fundamentally flawed,” citing evidence that Sandoval and Laxalt tried in a “real and substantial effort” to work out an agreement over the expanded checks with federal officials.

Laxalt only moved to halt the measure in late 2016 after receiving feedback from the Federal Bureau of Investigation explaining the state’s private party background checks are in the purview of Nevada’s own resources as one of the 13 “point of contact” states that conduct their own checks through a central repository. With the federal government declining to process the expanded checks directly, and the Nevada Department of Public Safety neither authorized nor funded by the ballot measure’s language to run the checks, Laxalt contended the law was junk.

“The Court’s 22-page decision reaffirms what my office has been saying all along — that the Act ‘is unenforceable as written,’” Laxalt said in a statement Monday, as reported by the Las Vegas Review-Journal. “This is not because of anything that I or other Nevada officials have failed to do; in the words of the Court, we have ‘undertaken a real and substantial effort to implement the law.’ Rather, it is a result of Question 1’s flawed drafting.”

The referendum backed by gun control advocates failed in 16 of the state’s 17 counties with only voters in Clark County approving the measure, in the end passing by around 10,000 votes. The initiative was funded by a $19.7 million campaign fueled in large part by former New York Mayor Michael Bloomberg.