Find hidden history at the Dug Up Gun Museum (VIDEO)

Where do rusty guns and relics scrounged from long-buried locales share untold stories of world history? At the Dug Up Gun Museum in downtown Cody, Wyoming — that’s where. Guns.com caught up with museum owners Hans and Eva Kurth who share their unusual passion for saving forgotten history one gun at a time.

The Dug Up Gun Museum is easy to find in downtown Cody, a kitty-corner from Buffalo Bill’s famous Irma Hotel. Owners Hans and Eva Kurth, along with their shop dog Harley, are the sole staff, keeping the museum open 12 hours a day, seven days a week, during the peak Cody tourist season May through September. Their passion for sharing the collection is evident in their welcoming smiles and warm greetings to each person through the door.

Though there is no admission fee to visit the museum, a small donation box and visitors log sits near the front of the museum. The Kurth’s maintain the place, including rent, displays, upkeep, and new acquisitions solely on donations, and while the donation box may not be full, their drive is undeterred.

Both the soft-spoken, bearded Hans and outgoing, energetic Eva say the last 10 years of running and living in the museum have flown by, as that’s been most of their married lives. The time and effort they’ve both spent toiling side by side to build their dream is evident in the attention to detail in everything from the handmade display cases to the documentation of every single piece in the collection.

A map full of pins on the wall mark the homes of visitors to the Dug Up Gun Museum, with pins covering nearly the entire globe. Hans and Eva are no strangers to the American dream. In fact, they are Canadian citizens who have been working for years now to attain their American citizenship, a point of obvious pride when the topic arises.

Organized in custom displays that Hans and Eva built by hand over the last decade, the collection has a wide reach.  Section titles include America’s War of Independence, Gold Rush Era, Civil War, The Old West, Indian Wars, World War I, The Roaring Twenties, World War II, as well as a section of locally found treasures. 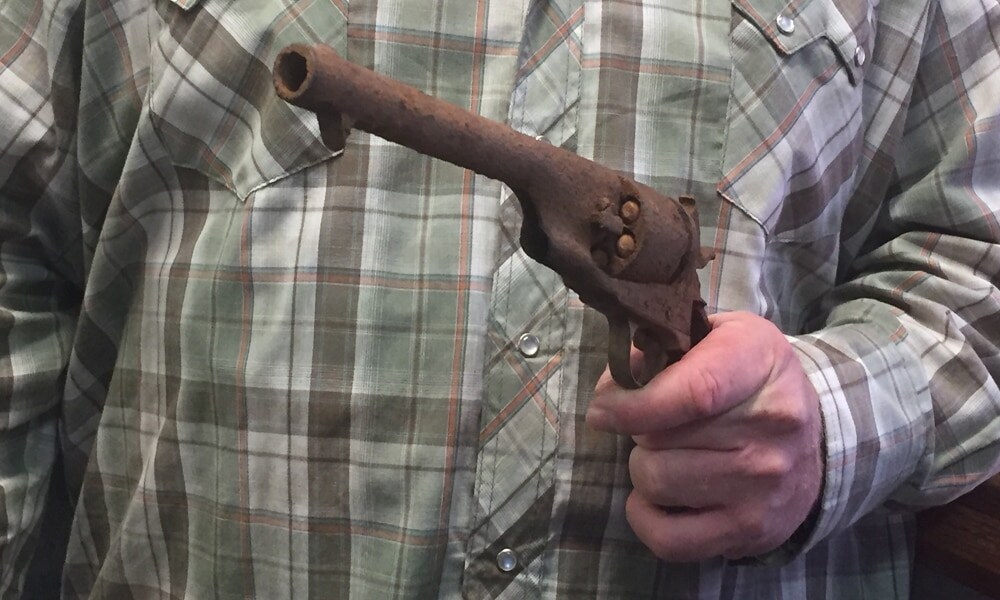 Detail of the Colt 1860 Army that was dug up in Arizona and found still loaded. Two rounds have been fired and four cylinders remain loaded with the hammer still cocked, leaving one to wonder what became of the gun’s owner. (Photo: Kristin Alberts/Guns.com)

Hans started collecting when he was a youngster and has been at it for over 36 years now. His personal collection giving birth to the museum as he yearned to share his love with others. With over 1,200 pieces and more coming in each week, it is difficult for even frontman Hans to select his favorites. Many of the guns are still loaded, leaving one to wonder what became of the weapon’s owner. Still other military guns, helmets, and belt buckles — excavated from battlefields across the globe — wear bullet holes.

One of Hans’ most unusual acquisitions was found in a tree in Oroville, California.  Though the majority of the museum’s holdings are either donated or purchased by the Kurths, Hans is no stranger to grabbing his metal detector and heading to remote locales to hunt for the next great relic. In fact, he has several clandestine “hunts” lined up as we speak. As the shop’s tagline says, “In this world, there are two types of people, those with dug up guns, and those who dig. You dig?”

If you don’t dig when you get there, the thought will cross your mind before you leave. When you visit, you’re talking directly with the owners, whose passion for their collection and ongoing work shine through in their interactions with visitors, sharing stories of particular finds, offering advice to tourists, and making new friends along the way.

Gems of the Museum

When tasked with picking up one of his most special treasures, Hans produced a Colt 1860 Army revolver. At first glance, the piece may look like a rusty chunk of steel, but is actually a fine old wheelgun that was excavated in Arizona, partially loaded and with the hammer in the cocked position. The first two rounds were fired, with four loaded cylinders still visible, leaving one to wonder what became of the gun’s owner in the midst of a gunfight or shootout. 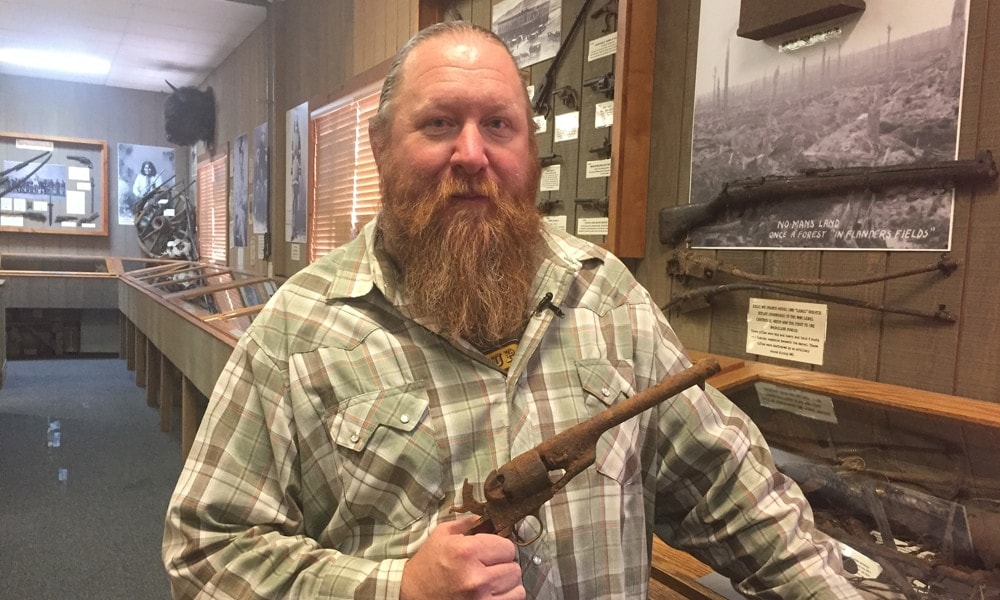 With a collection spanning 36 years and still growing, Hans Kurth can share the story of nearly ever piece in his museum. Here, he shows off one of his many favorites, a Colt 1860 Army revolver that fell still loaded and cocked. (Photo: Kristin Alberts/Guns.com)

Another of the more unusual pieces hangs on the wall near the entryway. That old remnant of what has been identified as a circa 1810 Spanish flintlock musket had grown into a tree in Oroville, California and made its way to the Dug Up Museum via another late collector of such relics. Adding to the intrigue of how the gun wound up in its tree-home is the fact it was also found with numerous coins and a set of strongbox keys. One thing is certain, the Dug Up Gun Museum is sure to pique the curiosity and imagination of its visitors, just as it did for us.

Have a Dug Up Gun of Your Own?

Whether you’ve been out metal detecting and unearthed a gun or inherited a rusty relic, Hans is constantly looking to add to the museum’s collection. The Dug Up Gun Museum is always accepting relic guns and other types of weapons and accouterments as donations. They will buy dug up or relic guns and weapons, as well, so don’t hesitate to reach out to these experts of buried history.

While optimistic about all the weapons he knows are yet to be unearthed, Hans is also suspect of fake relics and too-good-to-be-true stories that circulate the market as well. Yet, that doesn’t deter the Kurths from following their passion. In fact, it seems to make their drive even stronger to uncover and share the true gems of the guns that time had all but forgotten. 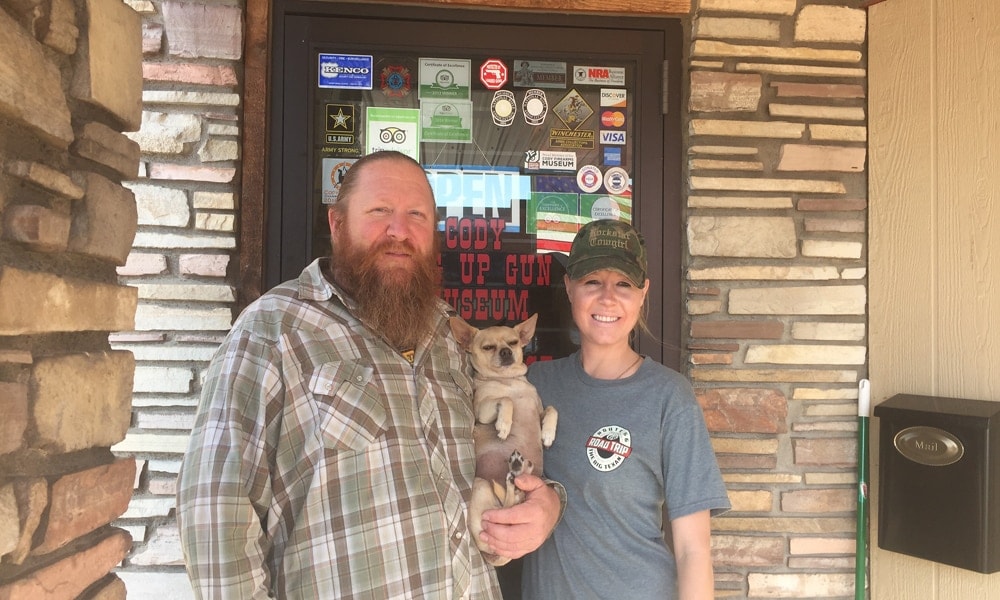 Home to the Buffalo Bill Center of the West, the massive Cody Firearms Museum, multiple gun shops and shooting ranges, as well as the Winchester Arms Collectors Association’s Annual Show and Meeting, Cody is a hub for gun-lovers, with the Dug Up Gun Museum the best kept secret of all. Though casual visitors may cruise through in a half hour, studying all the collection’s relics and chatting with Hans and Eva often takes several enjoyable hours. We easily spent half a day examining all the artifacts and visiting with both the Kurths and the mix of tourists who came through the door.

A small store at the front of the museum offers logo t-shirts and bumper stickers alongside vintage cowboy and outlaw photographs and western antiques as well as a few non-dug antique firearms for sale. Whether you’re an aficionado of history, guns, or just something unusual, the Cody Dug Up Gun Museum is a must stop. There, you can allow your imagination to fill in the blanks of the history of the relics that have been unearthed to find new life at an unforgettable locale. And best yet, meet two of the most genuine, down-to-earth folks tucked away in a well-hidden treasure of a museum on a quiet side street in beautiful Cody.