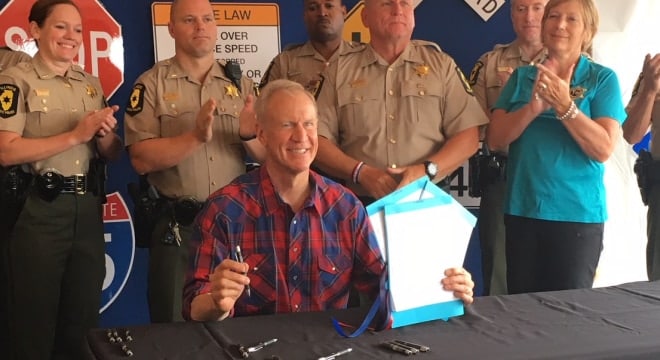 Moves to allow a grace period on gun card expirations and make more safety options available for hunters were signed into law by Illinois Gov. Bruce Rauner over the weekend.

The most sweeping of the bills, HB 4855, allows for a 60-day grace period on expiring Firearms Owners Identification Cards while a renewal application is being processed. Previously, state law treated FOID cards, issued for 10-year periods, as invalid if they expired during the renewal process, with penalties for gun possession without a valid card running as high as a year in prison.

“We shouldn’t punish gun owners who make every effort to get their renewal applications in on time,” Rauner, who signed the bill Friday, said in a statement. “This grace period will ensure there is no interruption in their rights to keep their firearms.”

Passing the state House 97-4 in April and the Senate by a unanimous vote in May, HB 4855 also tightens the reporting standards for hospitals to report all mental health admissions to the state’s Department of Human Services, which could trigger authorities to temporarily suspend FOID cards over health concerns.

“This new law allows the Illinois State Police, by rule, to suspend a FOID card for the duration of a disqualification, rather than having to permanently revoke the FOID card, as long as the disqualification is not a permanent grounds for revocation like a felony conviction,” said state Sen. Tim Bivins, R-Dixon, a supporter of the measure.

Further, the move gives ISP up to 60 business days to review pending FOID renewal applications, up from 30. It should be noted that the new grace period will not be extended to the 10,720 FOID holders whose cards expired in June and haven’t been renewed as of Aug. 13, as detailed by the Illinois News Network.

Witness statements show the state police and DHS supported the measure during the legislative process.

A separate bill, HB 5231, changes state law to protect police officers who have had their FOID card suspended over an inpatient mental health treatment that didn’t result in a determination of the officers being a danger to themselves or others. Previously, agencies in the state could make the possession of a valid FOID card a condition of employment. Passing the Assembly unanimously, the move was supported by a variety of police lobby groups and officers’ unions but opposed by the City of Chicago and the Illinois Sheriffs Association,

Effective in 2019, hunters in the Land of Lincoln will be able to don blaze pink in lieu of the more traditional safety orange as a result of Rauner’s signature Saturday on HB 4231. As such, the state will join Colorado, Louisiana, Minnesota, New York, Virginia and Wisconsin that have adopted the use of the color.

“Blaze pink can be easier to see, making it a safer option when hunters are in fields or woods,” said bill supporter, Sen. Neil Anderson, R-Andalusia. “At the same time, many believe deer can’t see the pink color. Giving hunters this option will only enhance their hunting experience and improve safety.”

However, some hunters have been tepid in their reception of pink sporting gear, with retailers in Wisconsin reporting last year that their stock of the red-hued apparel moved off shelves at a much slower pace than blaze orange.

Blaze pink is easier to see than blaze orange. Now hunters can wear it for extra safety. It’s a new law that should help reduce hunting accidents. pic.twitter.com/q8y3CiszOt

Poachers in Illinois who take antlered white-tailed deer will, with Rauner’s approval of HB 5317, have to pay the state $1,000 in restitution for each animal, with extra fees tacked on for each antler point. The proposal was billed as helping to safeguard the state’s deer population.

“Hopefully, the increase in penalties will discourage and minimize the need to kill animals for profit while increasing the value of our wildlife,” said supporter, Sen. Napoleon Harris, D-Harvey.

Both HB 4231 and HB 5317 passed the Assembly unanimously with the endorsement of the Illinois Department of Natural Resources.

HB 5317 treats poaching as the serious crime it is, and creates financial penalties for illegal hunting of our state mammal: the white-tailed deer. Now it’s the law. pic.twitter.com/C6gkodF7YZ