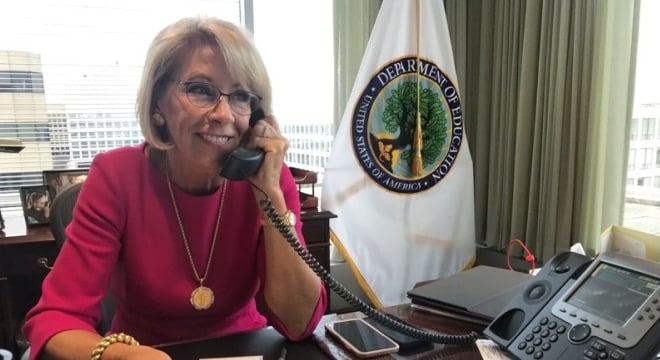 Education Secretary Betsy DeVos was slammed this week over the possibility that she may allow funds from her department to be used for arming schools. (Photo: U.S. Department of Education)

National gun control advocates on Wednesday decried reports that the Department of Education is considering funding more guns in schools.

Secretary of Education Betsy DeVos is on the receiving end of flak from the activists on the heels of a New York Times article that reported the long-running Student Support and Academic Enrichment grant program could be expanded by order of DeVos to fund purchases of guns for school security efforts. While a spokeswoman for the Education Department declined to comment on “hypothetical scenarios,” others were not so restrained.

“Why? Because gun manufacturers are in the hole at least $100 million since Trump’s election,” theorized Moms Demand Action founder Shannon Watts on social media. “The @NRA can’t scare Americans by saying the President is going to take away their guns, so they have to arm 3.6M teachers to put money back in their coffers.”

Why? Because gun manufacturers are in the hole at least $100 million since Trump’s election. The @NRA can’t scare Americans by saying the President is going to take away their guns, so they have to arm 3.6M teachers to put money back in their coffers. https://t.co/s5ldC4sJH9

Former U.S. Rep. Gabby Giffords went even further, releasing a three-paragraph statement through her gun control organization which in turn slammed the prospect of arming teachers, saying to do so “recklessly puts American children in even more danger,” before stressing the importance of the upcoming mid-term elections in November, where Democrats hope to make gains on Capitol Hill. “We are going to bring gun safety champions to Congress that understand the foolishness of a proposal like this and will have the courage to pass stronger gun laws,” said Giffords.

On the state level, in June Alabama Republican Gov. Kay Ivey issued an executive order to allow public school administrators to volunteer to be trained and armed in conjunction with their local county sheriff to protect campuses that lack a dedicated school resource officer. Meanwhile, in Florida, other armed teacher programs are being explored.