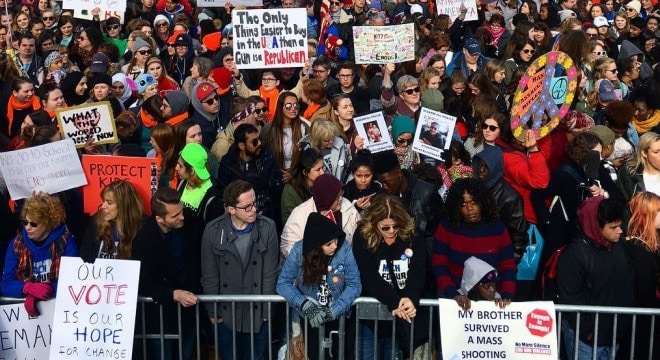 A Democrat representing New York in Congress argues that passionate teen advocates show they should be given the right to vote in federal, state and local elections.

The mechanism for the proposed constitutional amendment, H.J.Res.138, was introduced by U.S. Rep. Grace Meng earlier this month. The amendment would allow 16- and 17-year-olds to vote, the biggest change to the voting age since it was lowered from 21 to 18 in 1971.

“Over the past year, we have seen a huge wave of inspirational and passionate activism by students from all across the country,” said Meng in a statement. “Students are demanding change on issues such as gun safety, climate change, and healthcare. They deserve to have their voices heard at the ballot box and to have a say in the change for which they’re vigorously advocating. It’s clear to me that they should be allowed to vote.”

Meng attended and was invited to speak at a rally for the Parkland students’ March for Our Lives gun control group on Long Island in March. She later told the Washington Post that she supported the student organization’s gun policy agenda which ranged from universal background checks on gun transfers to bans on “assault weapons.”

On the lead up to the student march, the lawmaker frequently used the hashtag #StudentsDemandAction when commenting on social media about the Parkland shooting and her thoughts on increased regulation on guns.

A moment of silence won’t ease the suffering in Parkland, FL. I’m calling for swift passage of gun safety legislation so no community knows this pain again. #ParklandTownHall #StudentsDemandAction

How hard would it be?

The overall process is seldom successful and more than 11,000 proposed amendments have fallen by the wayside since the original Framers of the document, a ratio that gives about a 1-in-400 chance of passing. The track record of getting 67 out of 100 senators, 290 of 435 representatives, and 38 of 50 state legislatures to agree to a concept is abysmal. The last Congress saw 76 proposed amendments, none of which made it out of committee. The most recent amendment adopted, the Twenty-Seventh, was submitted to the states by Congress in 1789 but did not become part of the Constitution until 1992, more than two centuries later.

Other successful amendments have taken a shorter course to success. The Eighteenth Amendment — which brought about the almost universally panned concept of alcohol prohibition — passed in little more than a year but it was subsequently repealed by the Twenty-First which in turn took only nine months to enact after the country sobered to the idea. The amendment that took the fastest road to adoption, the Twenty-Sixth, which guaranteed the right to vote to those who were 18 years old, only took three months to fall into place in 1971.

Meng’s proposal has no co-sponsors and has been referred to the House Committee on the Judiciary. Meng, who has represented Queens in Congress since 2013, was a former New York State Assemblymember before heading to Washington. Since taking her seat in the U.S. House, she has been a reliable vote when it comes to gun control bills. So far this session she has co-sponsored a bill to investigate the NRA’s ties to an alleged Russian spy, the resurrection of a federal assault weapon ban, a plan to charge those who receive NICS background checks and use the money for research of gun violence as a health issue, banning bump stocks and expanding background checks.