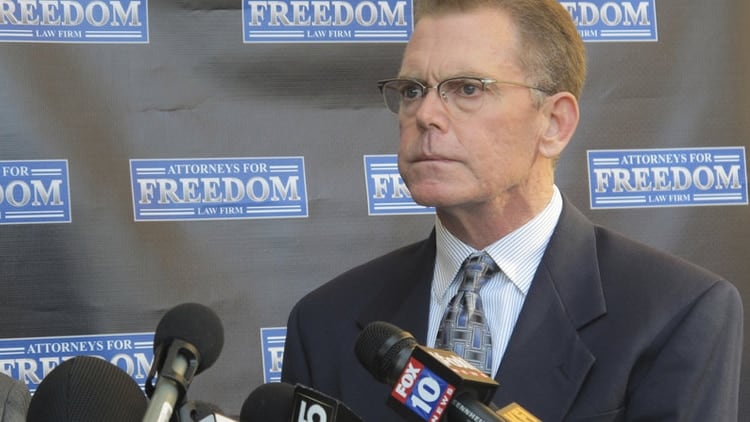 Douglas Haig, seen in a February news conference after being charged with selling armor-piercing bullets to Stephen Paddock, the gunman behind the Las Vegas massacre. (Photo: Brian Skoloff/AP)

A federal grand jury indicted an Arizona man this week for actions stemming from his connection to the gunman in the Route 91 Harvest music festival shooting, the Justice Department announced Wednesday.

Douglas Haig, 55, of Mesa, faces one count of engaging in the business of manufacturing ammunition without a license, according to the seven-page indictment. Through his company Specialized Military Ammunition, Haig manufactured and sold various high explosive, armor-piercing and incendiary ammo.

While hobby reloaders typically don’t come under scrutiny by federal regulators, the Bureau of Alcohol, Tobacco, Firearms and Explosives require those who manufacturer firearm ammunition for profit to obtain a Type 6 federal firearms license while those who make armor-piercing ammo or rounds for destructive devices have to maintain a Type 10 FFL.

This week’s indictment details a list of over 400 pounds of various ammunition components and 800 rounds of completed ammunition impounded from Haig by federal authorities. These included M62 and M196 tracers, Raufoss HE rounds, .30-06 M2 AP, and others.

The website for the Mesa-based SMA is currently offline but cached archives from January, with a notice that “We Will Be Closed Indefinitely,” advertises tracer and armor-piercing rounds in 5.56mm, 7.62×39, 7.62 NATO and other popular calibers “from small lots of 100 rounds to 10,000 rounds.” The sale of incendiary rounds to include those that use “Raufouss [sic] Zirconium compound which ignites diesel and kerosene,” was offered.

“From what we’ve seen, we don’t think any crime has been committed,” Marc Victor, Haig’s attorney, told The Arizona Republic Wednesday evening. An arrangement for Haig is set for Sept. 5 in a Las Vegas federal court.

Haig came to the attention of federal investigators as a result of his interaction with Stephen Paddock, a Nevada man who fired into a crowd of some 22,000 concertgoers last October attending a music festival on the Las Vegas Strip. Paddock killed 58 people and injured some 850 others.

While Haig told investigators he reloads but does not offer reloads for sale and none of the ammunition recovered in Las Vegas would have tool marks consistent with his equipment, forensic examination of rounds recovered inside the Paddock’s rooms at the Mandalay Bay Resort had both Haig’s fingerprints and tell-tale tool marks.

Previous court papers detailed that about two weeks before the shooting, Haig and Paddock arranged to meet at Haig’s house, where Paddock bought 600 rounds of .308 tracer rounds and an unspecified amount of .223 ammo.