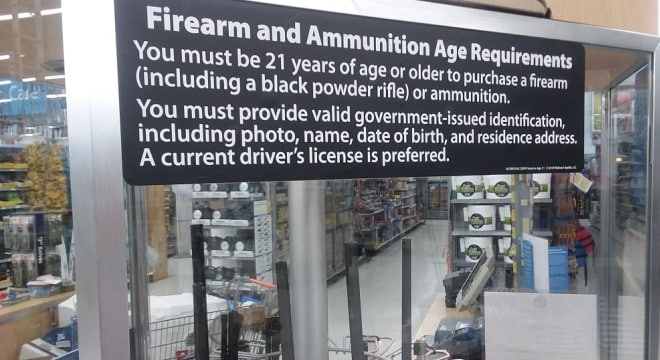 Earlier this year Walmart raised the minimum age for gun sales to 21 in a policy shift but in turn, opened themselves to age discrimination complaints. (Photo: Chris Eger/Guns.com)

An 18-year-old who went to the retailer to buy her first gun and was rebuffed took the matter to the state, who agrees she was discriminated against due to her age.

The Oregon Bureau of Labor and Industries this week found that the teen, Hannah Brumbles, was the victim of age discrimination in violation of state accommodations law after Walmart refused to sell her a gun over an internal policy. In late February, Walmart said it won’t sell firearms and ammunition to anyone under age 21, citing the Parkland shooting for its nationwide policy reversal.

Brumbles went into her local store in St. Helens just after her 18th birthday in April to buy her first gun — a family tradition, the Willamette Week reported — but was refused in line with the new policy. An avid shooting enthusiast who had hunted since a young age and has attended Project Appleseed marksmanship classes, the teen is seeking $135,000 from the big box chain — the same figure an Oregon baker was assessed after declining to make a wedding cake for a same-sex couple.

“Discrimination is discrimination,” says Chris Brumbles, Hannah’s father. Thus far Walmart has offered a $150 settlement but is facing a hearing in November to determine damages after state investigators filed official charges against the company on Aug. 21.

The settlement with Brumbles could just be the tip of the iceberg. The National Shooting Sports Foundation earlier this year warned federally licensed gun dealers considering limiting rifle sales to customers under 21 that they may expose themselves to legal action as a result.

“NSSF respects the right of individual businesses to make their own decisions about what is appropriate for their business,” the trade organization said. “However, in making the decision to refuse to sell to consumers based solely on their age, FFLs need to be aware that such a policy may violate state or local laws barring age discrimination and potentially subject them to civil lawsuits or civil enforcement actions.”

Firearm attorney Joshua Prince similarly cautions that age-based policies adopted by merchants in gun sales could run afoul of discrimination laws in Pennsylvania, particularly, while legal analyst Colin Kalmbacher at Law and Crime points out that as many as 19 states and jurisdictions have enshrined protections against unlawfully discriminating against customers based on age.

Walmart spokesman, Randy Hargrove, told Guns.com in a statement: “In February of this year, we reviewed our policy on firearm and ammunition sales and as a result, we raised the age restriction for the purchase of those items to 21. We stand behind our decision and plan to defend it. We are preparing for the November hearing before the administrative law judge.”

Meanwhile, the only state to arbitrarily raise the minimum age for firearm sales to 21 this year, Florida, is the target of a federal lawsuit from Second Amendment groups. Two other states, Hawaii and Illinois, had previously set a minimum age of 21 to buy any gun, with the latter making exceptions for adults under that age if they are in the military or have a parent or guardian co-sign for a state-mandated firearms ID card.