A third of the counties in Illinois are exploring ‘gun sanctuaries’ 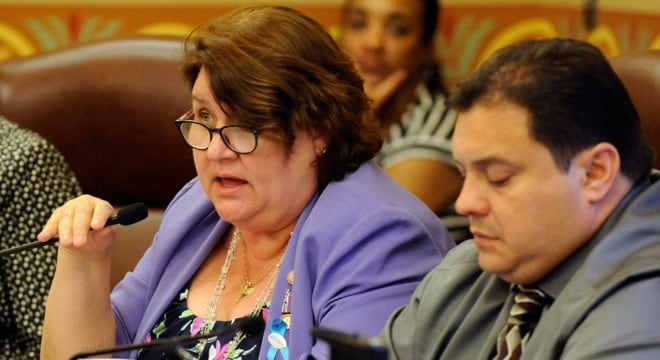 Wallis, who has backed a number of gun control bills that have caused heartburn at the local level, especially with down-state red counties, is asking state lawmakers to condemn the “gun sanctuary” concept. (Photo: Igla.gov)

Slammed by a Democratic lawmaker as “scofflaw counties,” a big swath of the Land of Lincoln has vowed to preserve gun rights regardless of what Springfield said.

State Rep. Kathleen Willis, D-Addison, argued that the increasing pool of counties adopting resolutions to protect local gun rights in the face of pending new state regulation are participating in a “shameless political stunt” that is unconstitutional. As such she has filed a bill, HR 1197, that seeks to condemn such Illinois counties that have labeled themselves as gun-friendly.

“I have been deeply concerned by the actions of several county boards in Illinois that have passed resolutions declaring that they will prohibit the enforcement of new gun laws passed by the General Assembly,” said Willis in a statement. “County board members are required to take an oath of office that includes a vow to uphold the Constitution of the State of Illinois. Instead, some are passing resolutions intended to set aside legitimate state law.”

Her measure would brand such counties that adopt the moniker of being a “gun sanctuary” be characterized as “scofflaw counties” and their resolutions in turn condemned by the General Assembly.

Last week the Logan County board approved a measure to place a sanctuary vote on the ballot in November, bringing the number to at least 26 counties where such moves are afoot, according to The Lincoln Courier. Currently, the Illinois State Rifle Association list some 39 counties that have sanctuary language adopted or pending, noting that “we expect to see more in the coming weeks.”