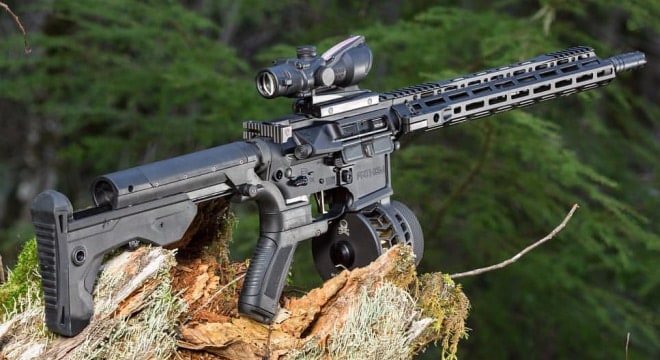 More than three months after Slide Fire stopped accepting orders for new bump fire stocks, they are still widely available and few owners have moved to turn them in where they have been banned. (Photo: Slide Fire)

Although the primary maker of bump stocks in the country long ago stopped taking orders for the controversial devices, they are still readily available.

Named as a defendant in a litany of lawsuits over the use of bump fire stocks at the Route 91 Harvest shooting last October in Las Vegas that left 58 dead and some 850 others injured, Texas-based Slide Fire Solutions shut down their website in May and announced they would no longer accept orders moving forward.

While the company is still fighting to have its funds freed from their bank, it has transferred its remaining inventory to Fort Worth-based RW Arms where it is available for retail sale. In addition to comprehensive SlideFire stocks, branded swag, and accessories, RW is also selling all-up rifles in .22LR and .223 with installed bump fire stocks.

It’s not just RW looking to fill orders. Online gun classifieds such as ArmsList and Gunbroker are well-stocked with those offering bump fire stocks for sale. Further, open-source FOSSCAD digital blueprints to print bump fire stocks are freely available for download on the internet.

While Americans could possess as many as 520,000 bump stocks, according to estimates from the Bureau of Alcohol, Tobacco, Firearms and Explosives, few are being turned in to authorities in states where they have been banned. Seven months after Denver outlawed the devices, none have been handed over to police in Colorado’s largest city. Similar results are reported in New Jersey while in Massachusetts, the first state to ban them since the Las Vegas shooting, numbers of relinquished bump stocks are in the single digits.

Although at least eight states have banned bump stocks and assorted other devices only one, Washington, has moved to establish a “buyback” program, with a fixed rate of $150 per device, but that program is pending funding allocations by lawmakers. At the same time, both Florida and Maryland are facing lawsuits over their respective bans based on Fifth Amendment grounds, arguing that private property can’t be taken for a public use without just compensation. A fresh legal challenge was mounted by Gun Owners of Vermont last week in that state. Meanwhile, at least one local ban in Ohio has been overturned following a lawsuit brought by Second Amendment advocates.

Along the Beltway, the matter has largely stalled. While legislation at the federal level to ban bump stocks has languished in committee, a rule proposed by the ATF reclassifying the devices as “machine guns” under the National Firearms Act and the Gun Control Act saw more than 80,000 public comments this summer from those on both sides of the debate on the items. Gun rights and public policy groups have already laid the groundwork for a legal challenge of any federal ban, especially one that does not come through Congress.

Late last month a group of 53 Democrats endorsed a letter to President Trump urging action on a legislative solution to the devices, which the chief executive hasn’t spoken about since March. Alternatively, the ATF itself has noted in the event of a ban that “individuals wishing to replicate the effects of bump-stock-type devices could also use rubber bands, belt loops, or otherwise train their trigger finger to fire more rapidly.”