Gun range, 2A group sue town in bid to stay in business after 'secret' rezoning 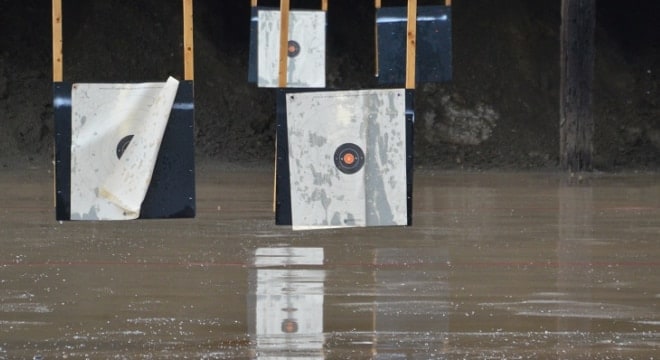 New zoning rushed into place by township leaders after a change in management of an area shooting club could mean the end of the line for the 50-year operation. (Photo: Chris Eger/Guns.com)

A Western Pennsylvania town is the subject of a federal lawsuit over their contentious interaction with an area gun range.

Robinson Township, located in a rural area just west of Pittsburgh, was named as a defendant along with the town’s zoning officer, Mark Dorsey, in a complaint filed by range owner William Drummond last week.

Drummond, a USPSA/IPSC champion shooter, heads the Greater Pittsburgh Gun Club on land that has been run by his family off and on since 1967 as a shooting range. However, he argues that township officials have wanted to close down the operation for decades and took advantage of a change in management to do just that.

According to court documents, the bad blood runs back to 1993 when the township brought a nuisance complaint against the range his uncle owned, then called the Greater Pittsburgh Trap and Skeet Club. A home to as many as 800 members over the year, the club was also open to the public and hosted military and police training as well. However, Robinson officials objected to the club’s hours of operation, projectiles leaving the property and the sound of automatic fire. A Court of Common Pleas found that the club was not a nuisance after a four-year legal battle, and cited Second Amendment protections barring the township from regulating the range.

While the original club folded in 2008, a business named Iron City Armory leased the land in 2016 with the township’s blessing to restart the range but the owner soon saw his permit revoked after zoning officials responded to complaints from neighbors and found the location was selling targets and ammunition, which they were not zoned for. The shutdown was short-lived as a judge reinstated Iron City’s permit saying the zoning hearing board committed legal errors.

Drummond assumed a 10-year lease on the land after Iron City quit their operation last December and, moving forward under the new name and management, talked to Dorsey about continuing the club’s operation. Within weeks, the township’s board of supervisors met with one of the plaintiffs from the prior legal actions who urged the lawmakers to zone the range out of existence, the lawsuit says.

In March, with his application for an operating permit allegedly “slow-rolled” by Dorsey, the supervisors held a special meeting to amend the township’s zoning ordinance to effectively bar the gun club property from continuing operation as a shooting range. The change was adopted on April 9 without Drummond’s knowledge and his long-pending permit application was marked “denied” four days later.

Now, allied with the Second Amendment Foundation, the case helmed by noted gun rights attorney Alan Gura seeks a permanent injunction against the defendants and a court order for the township to issue all the necessary permits for the club’s operation.

“This amounts to a local government attempting to drive a legal operation out of business through the use of zoning restrictions,” said SAF founder, Alan Gottlieb. “There have been meetings about which Mr. Drummond was not informed, and we believe this has been done in order to close down the historic range operation.”