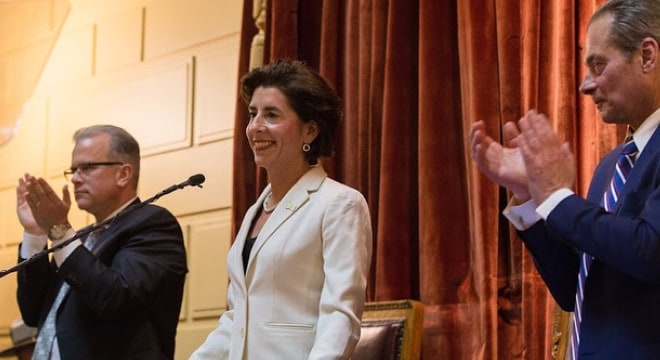 Raimondo, shown here at the Rhode Island State House, was criticised in her action by Republicans running for her office this November. (Photo: Raimondo’s office)

Gov. Gina Raimondo on Wednesday signed an executive action to bar firearms, except those carried by law enforcement, from public PK-12 schools. The action, backed up by a notice given to all schools by Commissioner of Elementary and Secondary Education Ken Wagner, was done to improve the state’s already strict gun laws, according to a release to Raimondo’s office. The order came amid reported “uncertainty among education leaders” and a “lack of consistent practice” among the state’s various school districts.

Until this morning, RI was one of only a handful of states that allowed non-law enforcement officials to carry concealed weapons into schools.

“It’s our job to protect kids and their teachers,” Wagner said. “Inconsistencies among laws, regulations, and local policies and practices create confusion, producing the exact kind of unsafe environment the law is intended to prevent. As we start a new school year, this directive provides clarity, until such time that the underlying laws are reconciled.”

Rhode Island’s current firearm laws prohibit gun possession on public school property but make an exception for concealed carry permit holders, police and those specifically appointed to be armed on campus. This has been a bone of contention with gun control advocates in the state who have campaigned to close what they have termed a loophole in state law.

With the action taken by Raimondo and Wagner this week, no one other than active law enforcement will be allowed to carry a firearm on school grounds until the legislature or the courts weigh in further on the issue. Meanwhile, the governor’s office has refused a request from at least one local media outlet to release the legal justification used by Raimondo to justify her order with a spokesman saying such documentation would be, “privileged and confidential.”

Raimondo, a Democrat seeking re-election in November, was immediately slammed for her announcement by a bevy of Republicans running against her in reactions that alternated between branding the move as “political pandering” and questioning the constitutionality of the ban. Since taking office four years ago, she has issued a series of executive actions on guns to encourage more firearm seizures in more situations, and signed laws banning bump stocks and increasing gun restrictions.

In her announcement, Raimondo claimed this week that “Even Mississippi bans non-law enforcement officials from carrying guns onto school grounds,” which is factually incorrect. Since 2011 the Magnolia State has allowed those with concealed carry permits and 8 hours of training to carry virtually everywhere in the state to include public school campuses as underlined by the state attorney general. The Giffords Law Center, politically allied to Raimondo, notes the exemption on their website. Further, lawmakers in the Southern state have this year pushed to expand that law in an effort to arm teachers and faculty.