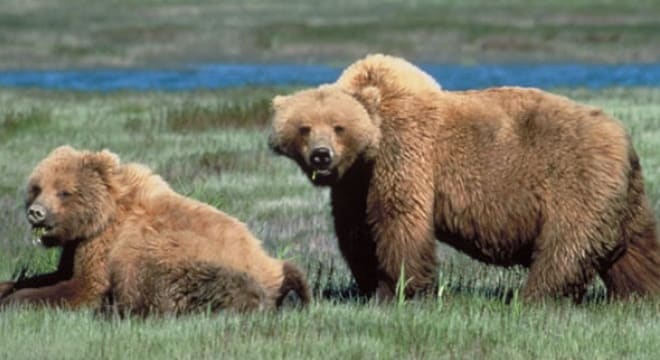 The hunt was the first scheduled in Wyoming in 44 years, while Idaho had not seen a season in 22. (Photo: USF&WS)

As part of a lawsuit brought by animal rights activists and Native American tribes, the pending grizzly hunt in Wyoming and Idaho has been put on ice.

U.S. Judge Dana Christensen, a 2013 appointment to the federal bench by President Obama, issued the 14-day preliminary injunction from his Missoula courtroom Thursday at 5:05 p.m.

The case, supported by almost 30 groups to include the Humane Society, Center for Biological Diversity, National Parks Conservation Association, Northern Cheyenne Tribe, and Sierra Club, took issue with the decision by federal wildlife officials to allow the population of grizzly bears in the Yellowstone area to be managed by local conservation agencies.

The Yellowstone grizzly was protected from hunting under the Endangered Species Act after the population fell to as low as 136 animals in 1975. However, it has now rebounded to around 700 and Interior Secretary Ryan Zinke, a former Montana lawmaker and self-avowed outdoorsman appointed to head the department last year by President Trump, moved to delist the herd from its status on the threatened species list last year, a move recommended by the U.S. Fish & Wildlife Service since 2005.

With that, Wyoming and Idaho proceeded to allow limited hunting of the bears from the greater Yellowstone ecosystem outside of the park, set to begin Sept. 1. The hunt was the first scheduled in Wyoming in 44 years, while Idaho had not seen a season in 22. Montana, who chose not to have a season this fall, last had a grizzly bear hunt in 1991.

The bears, which range in an area larger than the states of New Jersey and Massachusetts combined, have been the subject of a few high-profile encounters with humans as their population had increased. Last week, a family exploring Yellowstone said they had to use bear spray to ward an animal away from their 10-year-old son, who sustained injuries. While the National Park Service says the chances of getting attacked by a bear in the iconic park are slim — approximately 1 in 2.7 million — at least 38 attacks have been documented since 1980 including three deaths since 2011.

The hunt was backed by gun rights and sportsmen groups such as Safari Club International, the National Rifle Association, the Rocky Mountain Elk Foundation and the Sportsmen’s Alliance Foundation, who hold the effort to place the population back under federal protection is misguided. They say the use of hunting as a grizzly bear management tool is valid.

“These bears have recovered and are thriving. The time has come for them to be managed according to each state’s individual management plan in accordance with the North American model,” said Evan Heusinkveld, Sportsmen’s Alliance Foundation president and CEO. “Unfortunately, animal rights extremists cannot accept that hunting is a foundational pillar of our system of wildlife management, and has been a driving force for recovering wildlife species all across the country.”

The diverse groups against the hunt, ranging from Native American tribes who hold the bear as sacred to wildlife advocates who have backed anti-hunting measures nationwide, are concerned the state conservation agencies don’t have the animal’s best interest in mind.

“There’s a lot to celebrate with grizzly bears, but are they really recovered in this area? I just don’t think so,” said Matthew Bishop, an attorney representing WildEarth Guardians. “It’s more political than biological.”

Besides efforts to curb grizzly hunting, the harvesting of black bear in Florida and New Jersey has recently been halted despite often dangerous contact with humans from resurging populations.