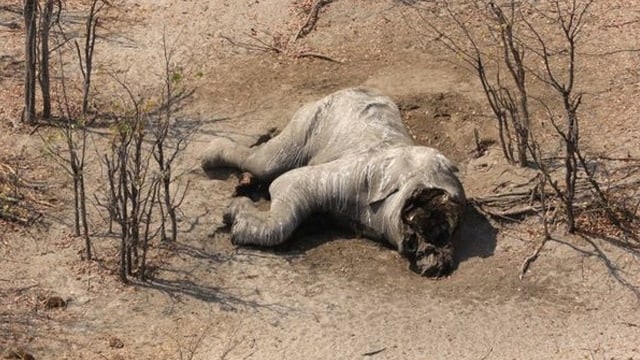 Most of the dead elephants seen in Botswana had their tusks removed. (Photo: Elephants Without Borders via BBC)

A non-profit conducting an elephant census made the grisly discovery near one of Africa’s most important wildlife reserves. Elephants Without Borders found in an aerial survey that as many as 87 recently-killed pachyderm carcasses with their tusks removed, sure signs of an explosive poaching epidemic.

“I’m shocked, I’m completely astounded,” Dr. Mike Chase with the group told the BBC. “The scale of elephant poaching is by far the largest I’ve seen or read about anywhere in Africa to date.”

Botswana, home to as much as one-third of the global elephant population as well as large stocks of rhinos in a country where some 17 percent of the land is set aside for national parks, for years had an unwritten “shoot-to-kill” policy against suspected poachers. Armed anti-poaching units in one 2016 article were credited with killing a sizable number of cross-border poachers to include 30 Namibians and another 22 Zimbabweans over a two-decade period. The unit was even the subject of a 1997 National Geographic special entitled, Wildlife Warriors.

According to the U.S. Africa Command, the 13,000-member Botswana Defence Force, which has received support from the U.S., spent much of their time in the bush patrolling against poachers.

“Most the operations we do are assisting the Department of Wildlife in anti-poaching,” explained Brigadier Mpho C. Mophuting, commandant of training for the Botswana Defence Force’s Ground Forces Command, in a 2012 article. According to a government website, the BDF has been tasked with such support since the 1980s.

Then, this May, President Carter Morupisi issued a directive stripping the guns from anti-poaching units patrolling the country’s porous border regions. His predecessor, Ian Khama, was a former general who formed the wildlife units and often touted his ties to the groups.

The country’s anti-poaching unit has been in such a poor state of affairs that advocacy groups have formed to seek donations for purchase such basic gear as camping and communication equipment, medical supplies and field forensic kits.

“The poachers are now turning their guns to Botswana,” said Chase. “We have the world’s largest elephant population and it’s open season for poachers.”