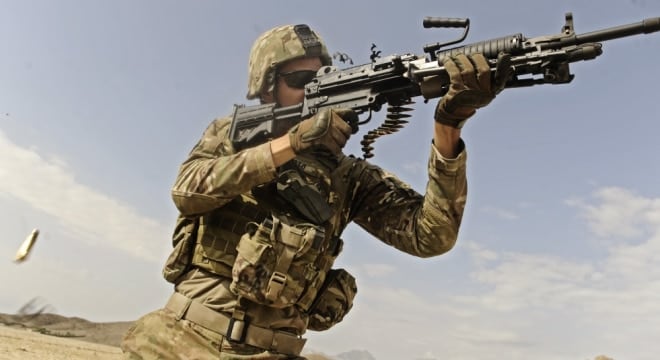 The $13.45-million firm-fixed-price award includes the production of both the 5.56x45mm MK46 and 7.62x51mm MK48 light machine guns as well as spare parts and engineering services in support of U.S. Special Operations Command.

The MK46, a lightweight variant of the FN M249 Squad Automatic Weapon– itself an evolution of the FN Minimi– designed for special operations, weighs just 15.4-pounds with its 16.3-inch barrel. Weigh savings on the gun come from a range of options to include a redesigned polymer buttstock and a titanium bipod. (Photo: FN)

The MK48, often termed the “Super SAW” weighs 18.26-pounds and has many of the M249s ergonomics but in a larger caliber. It uses a 19.75-inch barrel and has a 730 round per minute theoretical rate of fire when cyclic. (Photo: FN)

FN has long shown off variants of the MK46 and MK48 at trade shows with a variety of finishes and features. (Photo: Chris Eger/Guns.com)

According to the Department of Defense, work for the award will be performed primarily at FN’s factory in Columbia, South Carolina while Herstal, Belgium will conduct about 15 percent of the work. The award is expected to be completed by August 2023 with deliveries made to the Naval Surface Warfare Center, Crane, Indiana.