With the current Congress set to end in 2019, Democrats have aggressively sought to delay the nominee’s hearings, seeking a massive records dump–up to one million pages which can’t be made fully available until the end of October — relating to Kavanaugh’s past positions in the administration of President George W. Bush and in the Office of Independent Counsel during President Clinton’s White House era.

As the committee chair, Republican U.S. Sen. Chuck Grassley moved to open the hearings this week while Democrats on the committee, spearheaded by California’s Kamala Harris, Connecticut’s Richard Blumenthal and Corey Booker of New Jersey, moved unsuccessfully to block the proceedings over the issue of the documents while protestors sounded off in the gallery and were escorted out by Capitol Police. In all, some 61 were removed by authorities from the hearing.

In his opening statement, Grassley pointed out that the committee has access to all of the nominee’s 307 court opinions issued while on the bench of the U.S. Court of Appeals for the key D.C. Circuit, nearly a half-million pages of Executive Branch records, and 17,000 pages of other materials at their fingertips. “In short, the American people have unprecedented access and more materials to review for Judge Kavanaugh than they ever had for a Supreme Court nominee,” he said. 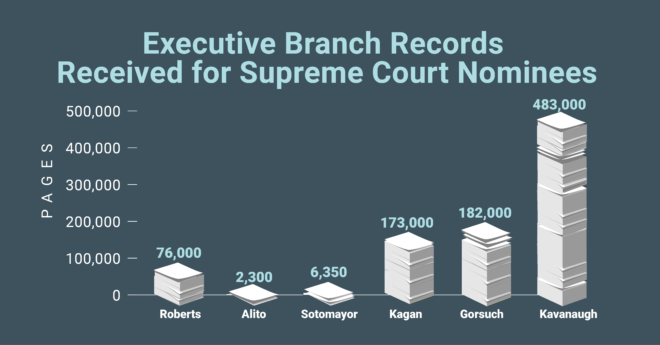 In evaluating Judge Brett Kavanaugh’s nomination to the Supreme Court, Senate Judiciary Committee Chairman Chuck Grassley said the volume of records available is greater than ever before. (Image: Grassley’s office)

Nonetheless, Grassley spent more than an hour sparring with committee Dems over the documents, with Booker saying they only had access to about 10 percent of Kavanaugh’s body of work.

Moving past the hearing’s first hour, the committee’s ranking Democrat, Sen. Dianne Feinstein, brought gun policy into play, calling the nominee “blessed by the NRA.” The California lawmaker, who wrote the original federal assault weapon ban, recalled Kavanaugh’s opinion in his 2011 dissent from the majority in the D.C. Circuit’s ruling on Heller II, which challenged the city’s prohibition on such semi-automatic firearms.

“In your own words, gun laws are unconstitutional unless they are ‘traditional or common in the United States,'” Feinstein said in her opening statement. “You concluded that banning assault weapons is unconstitutional because they have not historically been banned. This logic means that even as weapons become more advanced and more dangerous, they cannot be regulated.”

After equating the AR-15 to the M-16 and citing school shooting statistics compiled by gun control groups, Feinstein went on to say that, “If the Supreme Court were to adopt your reasoning, I fear the number of victims would continue to grow and citizens would be rendered powerless in enacting sensible gun laws. So this is a big part of my very honest concern.”

In response to the partisan discourse aired around the country, the President took to social media and blasted the proceedings late-afternoon. “The Brett Kavanaugh hearings for the future Justice of the Supreme Court are truly a display of how mean, angry, and despicable the other side is,” Trump said. “They will say anything, and are only looking to inflict pain and embarrassment to one of the most highly renowned jurists to ever appear before Congress. So sad to see!”

….looking to inflict pain and embarrassment to one of the most highly renowned jurists to ever appear before Congress. So sad to see!

White House Deputy Press Secretary Raj Shah posted a tally of interruptions and complaints about documents during the hearings, totalling 63 and 129 respectively.

Once the committee members’ opening remarks were complete — some six hours into the hearing’s first day — former Secretary of State Condoleezza Rice, who worked alongside Kavanaugh in her time with the George W. Bush Administration, introduced the nominee. After describing him as “hardworking” and “wise” in the 17 years she has known him, Rice then addressed the concept of Constitutionalism, saying “We Americans believe that the Constitution is our personal protection. We take our rights very seriously– and we will go all the way to the Supreme Court if we feel those rights are violated.”

Kavanaugh was named by Trump in July as his nomination to fill the seat opened on the nine-justice panel with Kennedy’s planned retirement. The committee’s hearings are expected to run through the week.