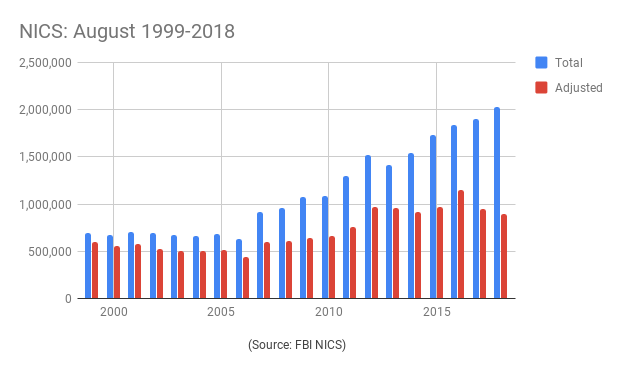 Estimated gun sales hit a seven-year low in August, according to federal data, despite background checks soaring to a new record high.

Dealers processed more than 2 million applications through the National Instant Criminal Background Check System last month, a 7 percent increase over 2017 and the busiest August ever recorded in FBI history. Estimated gun sales — the sum of transfers in the NICS’s handgun, long gun, multiple and other categories — declined 6 percent and totaled just 889,395, the slowest August since 2011.

The slump falls within the industry’s historical seasonal pattern — slow in the summer with a gradual ramp-up as fall gives way to hunting season. Gun sales typically peak during the holidays and taper off again in the spring, federal data suggests.