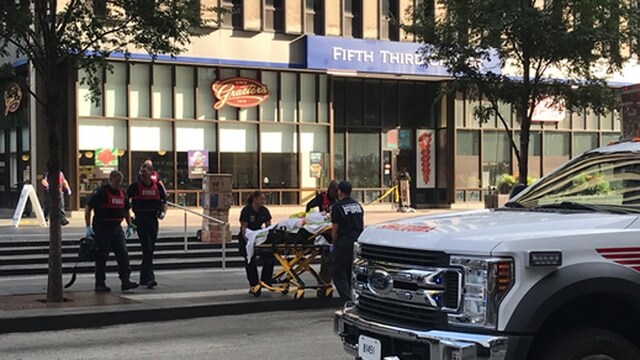 In two separate videos, officers can be see approaching the Fifth Third Center as gunshots ring in the background.

Bodycam footage of the incident. pic.twitter.com/PN4k3GE9nE

Surveillance video from inside the Fifth Third Center. pic.twitter.com/bi5fpmJHNE

One victim died at the scene and two others succumbed to their injuries at the University of Cincinnati Medical Center, Isaac said. Two others — including a woman shot 12 times — remain hospitalized. Law enforcement identified the deceased as Richard Newcomer, 64; Prudhui Raj Kandepi, 25; and Luis Calderon, 48.

So far, investigators have yet to reveal a motive. Isaac wouldn’t confirm reports that Perez — who arrived downtown dressed in business attire with a brief case slung over his shoulder containing 200 rounds of ammunition — was a former disgruntled employee or was headed to a federal courthouse.

“We really could find no other motive or connection to that location,” he said.

Police also released images of Perez’s 9mm handgun used in the attack and the brief case where he stored his ammo. He fired 35 rounds, according to police.

The suspect fired 35 rounds and was carrying more than 200 rounds. pic.twitter.com/bxpTdoSsyV

Gun used in the incident. The gun was legally purchased at a local gun supply store. pic.twitter.com/MH0AuAlmgo