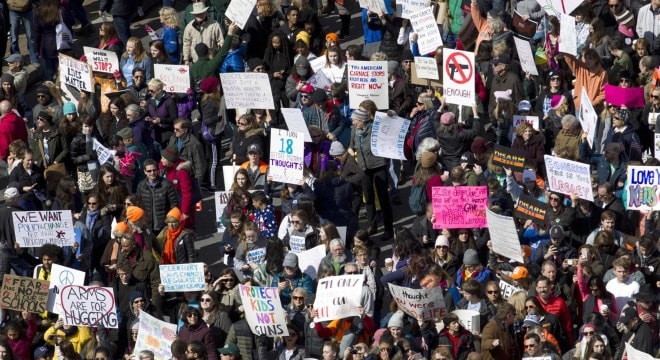 The groups, an outgrown of the advocacy wave that surged following the Parkland shooting in the state, are moving towards a voter-approved gun ban in 2020. (Photo: Americans for Gun Safety Now)

Two organizations have allied to put a constitutional amendment on Florida’s 2020 general election ballot to ban certain firearms and their magazines.

The groups, Americans for Gun Safety Now and the unambiguously-named Ban Assault Weapons Now, said in a joint statement released this week that they were formed during the advocacy wave that surged following the Marjory Stoneman Douglas High School shooting that left 17 dead in the state in February. Working together, they hope to gather enough signatures to put the initiative in front of voters for a yes or no vote that, if successful, would enact a statewide ban.

“The assault rifle, and its ability to fire approximately one hundred rounds a minute, can be purchased legally with no proof of training, no background check, and no regulations what so ever,” said Gail Schwartz, BAWNs chair, and the aunt of Alex Schachter who was killed at Parkland. “Our goal is to take military-style firearms off the shelves thus saving the lives of innocent people.”

Both organizations, with a small social media footprint and few independent events under their belt, are facing an uphill battle. The groups would need to gather 766,200 signatures from registered Florida voters through an approved petition process to put the amendment on the state’s 2020 ballot. Once there, state law requires that a constitutional amendment has to gather 60 percent of the vote to become law, rather than a simple majority.

A previous attempt by the Florida Coalition to Prevent Gun Violence at a ballot initiative in 2016 for the 2018 election fizzled while several moves to bring a ban about through the Florida Constitutional Review Commission, which met for the first time in 20-years this March, were unsuccessful.

Dems in the Florida legislature have fought hard for bans on a wide swath of semi-auto firearms in following the Pulse nightclub attack and after this year’s Parkland school shooting with Republicans rebuffing the effort both times. In this year’s rhetoric-charged gubernatorial race, many of the most high-profile Democratic candidates for the office, to include former U.S. Rep. Gwen Graham and Tallahassee Mayor Andrew Gillum, have strongly endorsed gun bans as part of their platform.

Opposing the voter initiative in Florida, often described by some as “The Gunshine State” for its relaxed firearm laws, would be entrenched national and local Second Amendment organizations. Similar efforts to enact gun bans via the ballot box in Oregon fell apart earlier this year after a series of lawsuits from pro-gun advocates while a better organized $4 million push in Washington was only allowed to proceed after the intercession of the state supreme court.