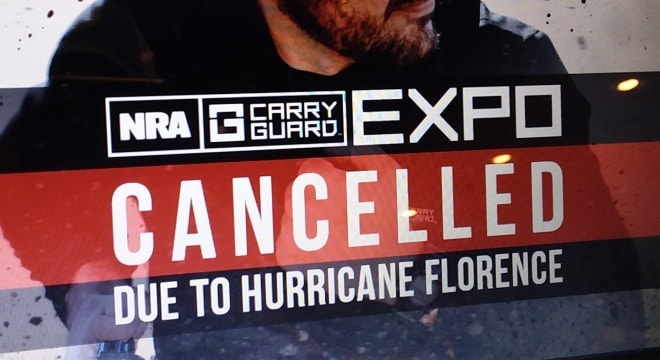 The notice, posted Tuesday afternoon, advises those who purchased tickets to the event or its paid workshops will receive refunds for their purchases.

The second annual event centered around the National Rifle Association’s concealed carry insurance program was canceled by the group due to a looming tropical threat.

Set for this weekend at the Greater Richmond Convention Center in Richmond, Virginia, the NRA Carry Guard Expo has been canceled due to Hurricane Florence. The notice, posted Tuesday afternoon, advises those who bought tickets to the event or its paid workshops will receive refunds.

“Despite this major weather event being beyond human control, the NRA regrets any inconvenience caused by this decision,” the NRA said in a statement. The group said the decision was reached after a State of Emergency was declared by Virginia Gov. Ralph Northam and “required careful deliberation and concern for the safety of attendees, exhibitors and others involved with the event.”

As of Tuesday afternoon, the National Weather Service’s National Hurricane Center has classified Florence as a dangerous category 4 hurricane on the Saffir-Simpson Hurricane Wind Scale, packing winds of 140 mph and is ripe to continue strengthening. On the forecast track, the center of Florence will move over the southwestern Atlantic Ocean between Bermuda and the Bahamas Tuesday and Wednesday, and approach the coast of the Carolinas on Thursday, with hurricane-force winds extending outward up to 40 miles from the center and tropical-storm-force winds extending up to 150 miles.

Last year’s inaugural Carry Expo, held at the Wisconsin Center across a three-day weekend, saw 14,127 visitors according to a statement from the group. Though the NRA’s Annual Meetings draw much larger crowds–  topping 80,000 — the Carry Guard event was tightly focused on personal protection and concealed carry products, education, and vendors. Compared to the more than 800 exhibitors and vendors at their annual meetings, the 100,000 sq. ft. floor at the Wisconsin Center boasted a more conservative 160. An important facet of the event was a mix of 124 seminars featuring speakers ranging from Brazilian Jiu-Jitsu expert Royce Gracie to Wisconsin and Utah CCW courses.

The most talked about segment of the expo was the Concealed Carry Fashion Show which gave a stage to a number of products from attending vendors. The NRA said that more than “15 global media members, including fashion blogs and international news outlets,” attended the event.